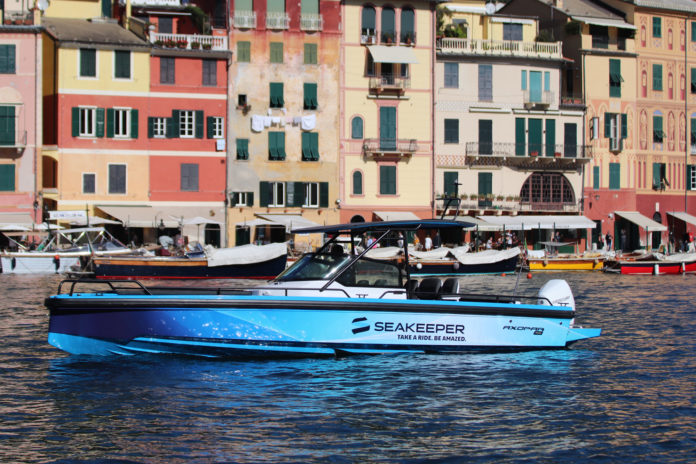 The ingenious Seakeeper uses a gyro stabilizer to reduce boat roll by up to 95 percent.

Contrary to popular belief, not all boaters have cast-iron stomachs. For some of us, a few rogue waves and a day on the water can turn into misery.

For relief from seasickness, boaters often turn to over-the-counter medicines and acupressure bands. What if you could stop seasickness while out on a boat? The Seakeeper gyro stabilizer might be the solution for a pleasant day at sea.

“People who are new at boating, it kind of takes away a little bit of that anxiety and makes it a more comfortable ride for them and the seasickness, of course,” said Kelsey Albina, communications manager for Seakeeper Inc. “The side-to-side roll is what most often causes seasickness, so giving people the ability who weren’t able to boat before now have that opportunity.”

“The goal is to stabilize every boat and make it so that people look back and they don’t remember what it was like when boats used to roll,” Albina said.

Earlier this year we had an opportunity to test out a Seakeeper 2 on a 30-foot center-console model in Miami. Without the Seakeeper 2 doing its magic, the V-bottom was getting bounced around by wakes from boat traffic in the bay. After activating the Seakeeper, the boat stabilized within 25 minutes and was no longer upset by the wakes.

Two big guys on the boat tried to shift their weight around but the center-console model didn’t budge, thanks to the gyroscope spinning 9,000 rpm behind the leaning post. Albina said the goal for every boat is at least 80 percent roll reduction and on the demo model in Miami it felt closer to 100 percent.

When the company was founded in 2003, the challenge was to miniaturize a gyroscope that was heavy and impractical for recreational purposes. Gyroscopes have been used on cargo and military ships for more than 100 years but designing one for smaller boats had its own challenges.

“If you look at an old photo, the person standing next to the gyroscope is like a little ant next to it, so it was really impractical for a lot of applications,” Albina said.

After five years of research, engineers came up with a solution and launched the first Seakeeper in 2008, targeting vessels 50 feet and longer. Today the company offers seven recreational models and five HD models for boats from 27 feet and up. About 75 percent of Seakeepers are installed in new models but older boats can be retrofitted for the gyro stabilizer, Albina said.

“The coolest thing about our product is we spin the flywheel inside of a vacuum so you are able to cut the weight, halve the power requirements and it generates heat inside that vacuum so we’ve got a patented cooling technology that we use,” she said. “We’ve been able to take that age-old idea of using gyroscopes for stabilization and make it practical for the everyday boater.”

Because of the vacuum seal, Albina says the flywheel can spin three times faster than if there was air resistance and it protects critical components such as bearings and the motor from the harsh marine environment.

At the heart of the Seakeeper is the flywheel, which spins up to 557 mph to generate enough force to keep the boat from rolling. A cooling system pulls the heat from the flywheel and dissipates it through a glycol/seawater solution. The units are equipped with active control smart technology to gauge the sea and react.

Seakeeper works with more than 200 boatbuilders where the boats have already been spec’d with the correct Seakeeper unit. For refits, a Seakeeper dealer determines whether a boat is a good candidate.

“The biggest challenge is space,” she said. “A lot of people don’t have giant holes waiting to accept more equipment on a boat that is already complete.”

Refits generally require reinforcing the stringers and some glass work. The dealer will also determine if the boat needs an additional battery to run the Seakeeper 2 or Seakeeper 3, Albina said. The Seakeeper models for larger boats run on AC power or a generator.

Access is required for maintenance and the company recommends having the Seakeeper inspected every 1,000 hours. Technicians examine the brake bushings, hydraulic cylinders and flush the hydraulic oil lines, if necessary. On the larger Seakeeper units, Albina said the zincs need to be changed about every 150 hours.

The smallest Seakeeper for boats 27 to 32 feet retails for just under $20,000, not including installation. Larger units such as the Seakeeper 16 costs $109,900 before installation. While the system has a big sticker price, what’s the price of comfort, especially those challenged by seasickness.

See a video demonstration of the Seakeeper