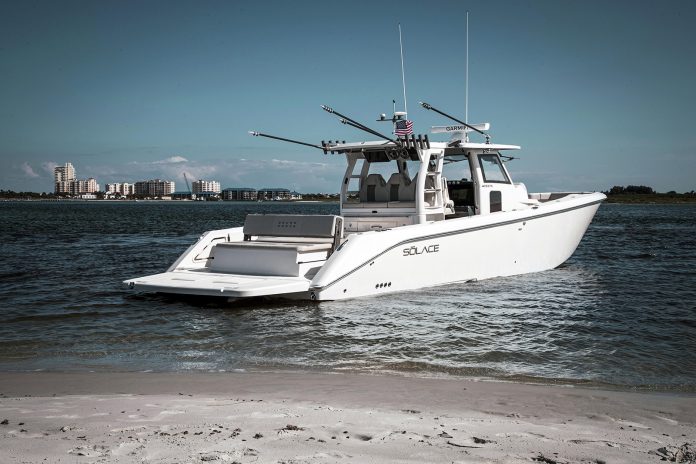 Boat Shows are a great way for manufacturers to showcase their latest innovations, and the 2022 Miami Boat Show was no exception. At the show, Volvo Penta and Solace collaborated on a new kind of center console, the Solace 415 CS.

Granted, most are. In fact, Solace also manufactures the 41 CS outboard model, which can be rigged with multiple outboards up to a max of 1,800 hp. The teams at Volvo Penta and Solace, however, saw the potential advantages of diesel power, namely fuel efficiency, range, and increased cockpit space, without sacrificing performance.

With the flip of a switch, a touch on the screen, or the press of a button on a wireless fob, the sunpad lid raises to reveal a compact, yet well-organized engine compartment.

The 415 CS is powered by Volvo Penta’s D6, 440 hp, common rail engines, which have been produced since 2003. They went through a complete rebuild and overhaul in 2018, and now, according to Volvo, it is the highest horsepower diesel production package with an Aquamatic drive system.

For the setup on the Solace, Volvo kept servicing the engines top of mind, and all components that need to be accessed regularly for maintenance are easily accessible on the top of the engine. To check the oil and coolant levels, you don’t even need to raise the hatch to the engines. Volvo’s Electronic Vessel Control (EVC) system allows detailed engine information at the touch of the screen at the helm.

Loaded up with a crew of 10 people (it is the Miami Boat Show after all) and a half tank of fuel, we set out for Biscayne Bay, and out to the Atlantic Ocean to put the 415 CS through its paces. Advancing the throttles from idle speed for a hole shot, the 415 CS quickly jumped on plane with very little bow rise.

If you’re familiar with the Volvo Penta IPS system with Joystick control, this Volvo package offers the same features, such as the fingertip control that the Joystick offers, which provides optimum control around the dock. The wet clutch pack transmission in the outdrive allows for slippage in dockage mode, which reduces power to the props by 50 percent for more delicate handling. In addition, the angler will appreciate the fact that a slow troll of 2.5 mph can be achieved, even with boat engines in gear. The control system also features Dynamic Positioning, ideal for holding the vessel in a stationary position when required. 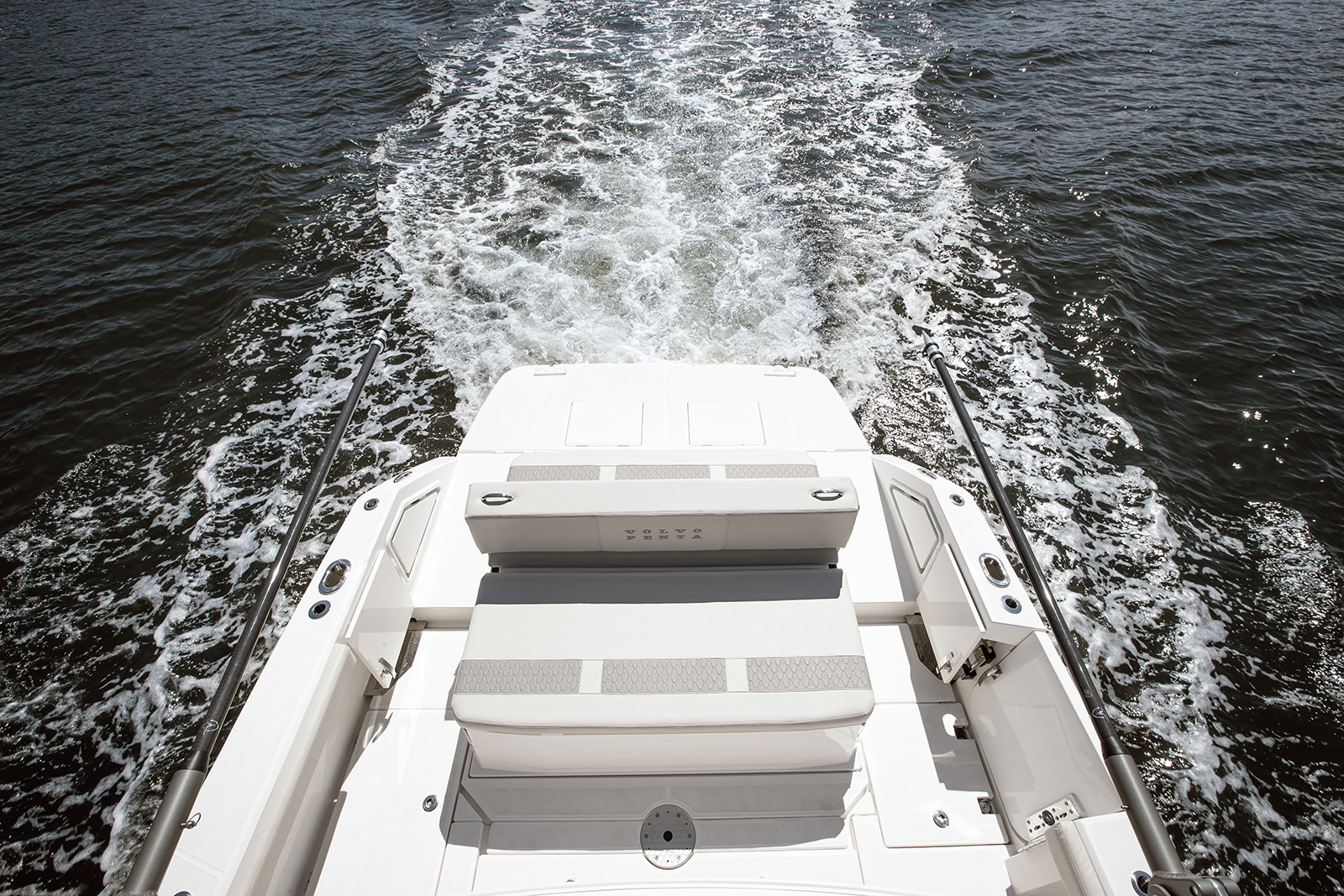 As for the layout of the 415 CS, with the absence of outboards hanging off the transom, the entire cockpit opens up and allows for a vast amount of space while underway or for dockside entertaining. The swim platform also makes boarding a breeze and is ideal for swimming or diving.

The engine compartment hatch doubles as an enormous and ingenious sunpad that transforms into various configurations.  A movable backrest can be adjusted to multiple positions for either a forward or aft-facing bench seat. Fold the backrest down, and you have a sizeable sunpad. Flip a switch, and the forward section of the sunpad raises for an aft-facing lounger! Transom walkthroughs bracket the sunpad for easy access to the aft deck area.

Under the T-Top and behind the helm seat, you’ll find an elevated bench seat, which when raised, reveals an entertainment area complete with a sink with on-demand water, a built-in barbecue, and plenty of storage space. Speakers throughout the boat are abundant and mounted facing aft under the hardtop. A pair of flat-screen monitors mirror what the captain sees on the main displays at the helm.

The helm itself features three comfortable bucket seats fitted with inboard armrests. Mounted on the port armrest, you’ll find Volvo Penta’s joystick control, which allows for precise control from either the amidships or the port seat. The wheel is mounted amidships and is flanked by a pair of massive touchscreen displays that allow the captain to monitor and control all the onboard systems. A unique feature is the helm area cockpit sole that can be raised and lowered hydraulically, providing easy stand-up operation, no matter how vertically challenged you may be.

There is a triple lounge forward of the windshield, and a flip-down armrest in the back of the middle seat that converts the area to a luxurious lounge for two. Recessed bench seats in the hullsides make for good use of space, and the benches themselves are, in essence, removable coolers, but like all the other seating areas they are fitted with a high-quality memory foam for the upmost comfort.

Down below, you’ll find one of the larger accommodation areas in a center console of this size. Tastefully decorated, the cabin features a facing settee area that can be converted to a queen-sized bed. Other features include a 32” TV, a galley area, and an enclosed head compartment with a unique rainfall shower. A 16,000 BTU reverse cycle heat/air keeps the cabin comfortable, and access to this compartment is effortless via an oversized access hatch with a custom hinge configuration.

From bow to stern, the Solace 415 CS is packed with innovative and exciting design features. Great touches include the use of magnets to prevent cushions from flying, and magnetic areas on the gunwale to set your metal cup. From the performance and handling to the tremendous fuel economy thanks to the Volvo Penta power, this boat will please cruisers and anglers alike.