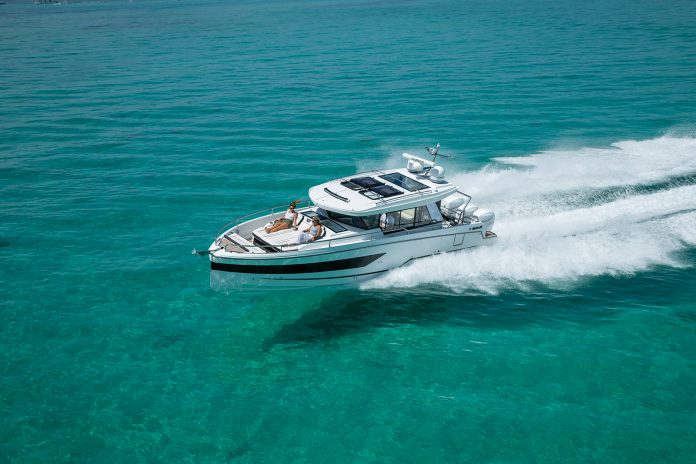 After making its debut at several European boat shows this summer, the new Wellcraft 355 had its North American unveiling at the Fort Lauderdale International Boat Show in late October.

The Michael Peters-designed Wellcraft 355 features a plumb bow, a European trend that is showing up on more V-bottom boats. The running surface is based off Wellcraft’s 353 center console.

“The plumb bow does basically two things—you maximize space, but you also maximize your running surface,” said Nick Harvey, brand director. “That gives you a boat that planes faster, gets out of the hole faster and basically gives you a much more stable ride.

“We like that it gives it this sort of contemporary look and design, and we know people are looking for something fresh in the market today.” 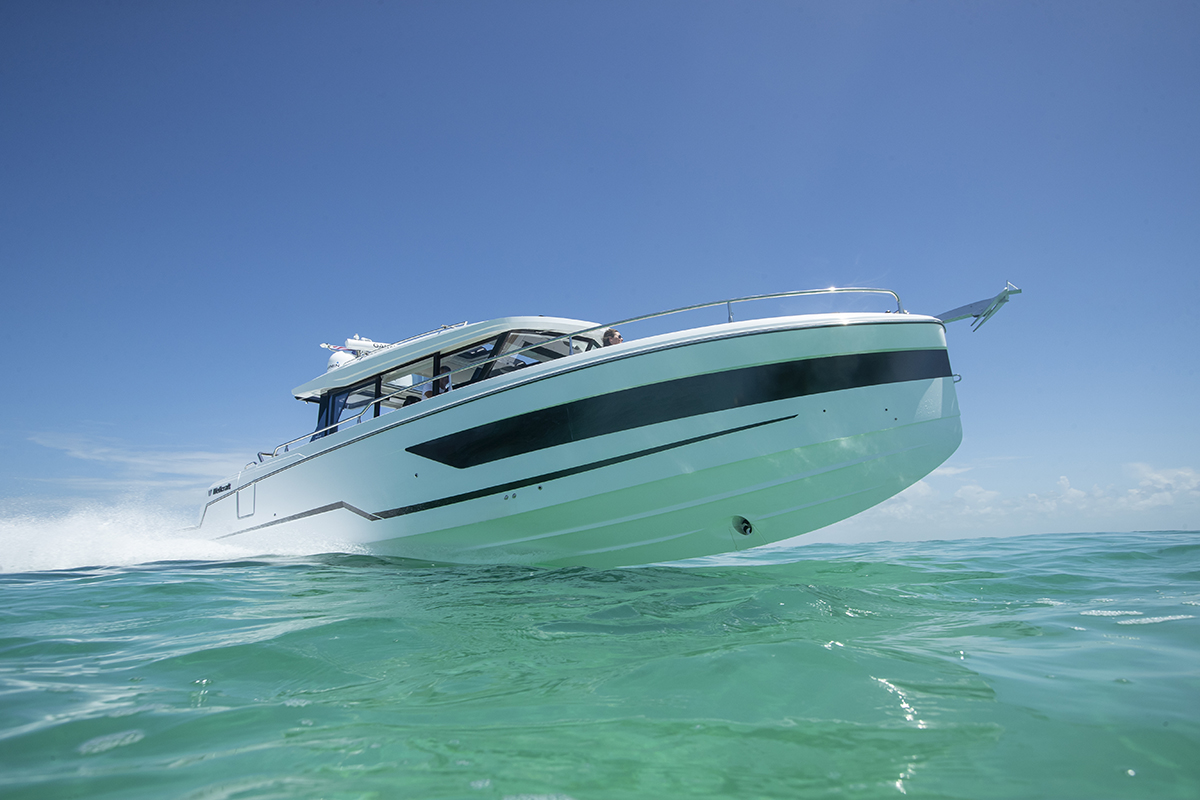 The Wellcraft 355 (35’10” LOA, 10’10” beam) features an enclosed pilot house with sweeping 360-degree views. The wheelhouse seats five people and comes with full galley and an L-shape bench seat for meals and lounging. To connect with the outdoors, owners can open the top-hinged window and entrance door. Clear panels in the hardtop allow in lots of natural light.

Electronics at the helm includes a single or twin Garmin GPSMAP 8416 XSV screens and Wellcraft offers an upgraded audio package with top-shelf products from JL Audio and Fusion Apollo. Other options include a diesel generator, air conditioning and a Seakeeper gyro.

Wellcraft tapped designers Pawel Denert and Camillo Garroni for the 355 model and the pair’s work shined in forward cabin. Down below the spacious cabin sleeps four people and accommodations include a full-size bed and ensuite bathroom with a separate shower.

When the weather is warm, sun worshipers will spend plenty of time in the bow. Wellcraft provided three large sunbathers and a bench seat, while on the transom there is a bench seat for three people that folds away when not in use.

Wellcraft offers the 355 with triple outboards from Mercury Marine and Yamaha. With 1,050 horsepower on the transom, Harvey said the traditional V-bottom has a top speed of over 60 mph.

The model is built in Europe and Wellcraft uses a mix of vacuum bagging and resin injection, and the boat features twice the rib structure of a typical cruising boat, Harvey said.

“It’s much more rigid because basically the vacuum bagging and the injection create a very rigid piece of fiberglass, much more than if you’re just kind of rolling it out by hand and taking the air out,” Harvey said.

With a starting price of $584,200 (as of December 2022), the Wellcraft is aimed at the adventure market. The adventure fishing package includes an cockpit baitwell and saltwater washdown, LED lightbar, roof racks and four rod holders on the wheelhouse roof.

“It’s really something unique in the marketplace. There’s not another adventure commuter-style boat that offers the size that we offer.”