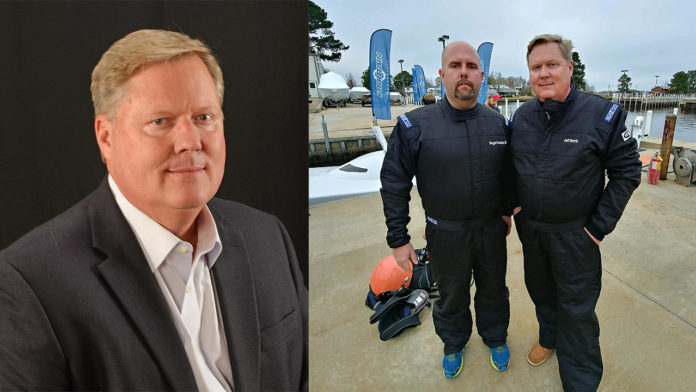 Harris, who was among the first employees at Fountain Powerboats when founded 40 years ago, takes the reins of the company that includes the Fountain, Donzi Marine, and Baja Marine brands. He steps into the top role following the death of Joe Curran, who passed away March 13 after a short battle with stomach cancer.

Harris is well known in offshore racing having collected eight World Championships and 12 National Championships during his storied racing career.

“Nobody respects Iconic’s heritage more than I do,” Harris said in a press release. “From day one we’ve enjoyed a competitive edge and I’m going to build on that. Whether it’s Fountain’s 43′ NX flagship, the revolutionary Donzi 41′ GT or the popular Baja 27′ Outlaw, boaters expect a performance advantage from Iconic. My job is to add all I’ve learned in racing and manufacturing to an already winning formula.”
Harris has worked all aspects of the marine industry including manufacturing, sales and customer service. He grew up and lives near Iconic Marine’s operations in Washington, N.C.

Iconic Marine Managing Partner Fred Ross said Harris is the right leader at the right time for the boat building company that is still coping with the loss of Curran.

“He joins IMG on a wave of momentum as the company just completed a record-setting quarter,” Ross said in a statement. “My intent is to dominate in every category of boats we build and I’m confident nobody can take us there faster than Jeff Harris.”
Fountain Powerboats founder Reggie Fountain supports the decision to bring Harris on to lead the three brands.

“Whether it’s boat design, hull construction, rigging, sales, warranty or talking to customers at a boat show, Jeff’s understanding of what it takes to make a boat company work is unmatched,” Fountain said. “Behind the wheel of a center console sport cruiser, a high-performance V-bottom or a 185 mph Unlimited Superboat, there’s nobody better.

Out and About in The Abacos