Home Boating News Autonomous docking boats will one day be coming to a dock near... 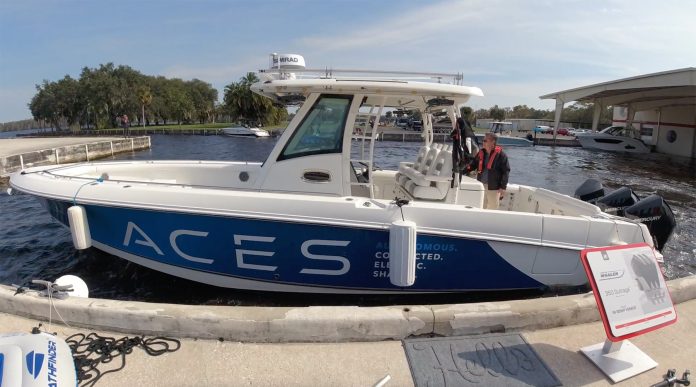 Brunswick Boat Group engineers demonstrated the remarkable technology during a media event at Lake X in St. Cloud, Fla. The technology is still in development, but in the future is expected to be on Brunswick boat brands including Boston Whaler, Bayliner and Sea Ray boats.

The autonomous docking project is part of the company’s ACES strategy: Autonomy, connectivity, electrification and share access. Brunswick had invested heavily into research and design with a steady of products in the pipeline, said CEO David Foulkes.

“We have product long-range plans that go out 10 years, so we’re not like, ‘We finished one product, what do we do next?’” Foulkes said. “We know exactly what we need to do from a product competitiveness (and technology) perspective.”

Engineers equipped Boston Whaler 350 Outrage with triple Mercury Marine 300-hp outboards with a series of sensors and cameras on the bulkhead. During the demonstration, engineers pulled the center console away from the dock, touched a button on the screen and stood at the rear of the cockpit.

The boat gently moved toward the dock in windy conditions with the bow thrusters and outboards working in tandem. An engineer on the dock put an inflatable raft in the water, causing the boat to stop the autonomous docking and working as designed.

Engineers believe the technology will not only help novice boaters docking, the collision-avoidance technology could substantially reduce accidents. Brunswick hasn’t set a timeframe for a public release of the autonomous docking technology, but engineers are getting closer.

The challenges for Mercury are both technological and economical. The technology is still learning how to recognize objects in a marine environment, while making autonomous docking affordable, which doesn’t have the economies of scale as the automotive industry.

Brunswick is a far more technology-oriented technology company than five years ago, Foulkes said. That’s why Brunswick displays at CES Las Vegas and participates in technology companies around the country. The goal is to show the company is more than boats, engines and electronic accessories.

“We always want to be on the leading edge,” Foulkes said.