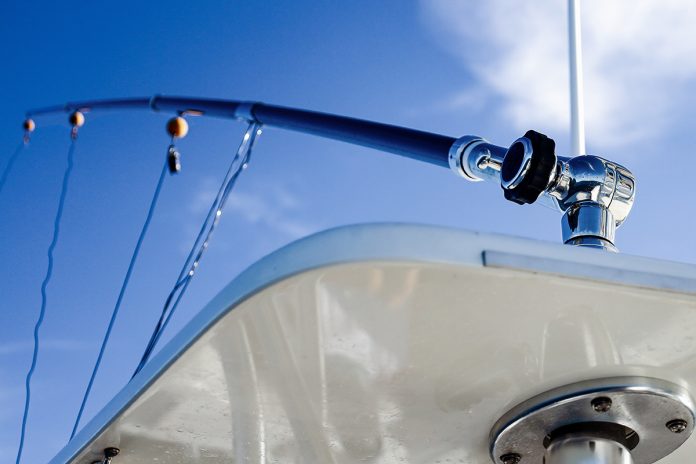 Hurricane Ian forced the cancelation of this year’s International BoatBuilders’ Exhibition & Conference where the marine industry comes together each year in Tampa, Fla.

The three-day show in late September is an industry event for boatbuilders, dealers, marina operators and other marine professionals. Companies use IBEX to announce new products and there is a good chance you’ll start seeing the new stuff on boats in 2023.

Some companies such as Suzuki Marine pushed their announcements to the Fort Lauderdale International Boat Show in late October, while other companies unveiled products even with IBEX canceled.

Our editors picked five favorite new products that would have debuted at IBEX. 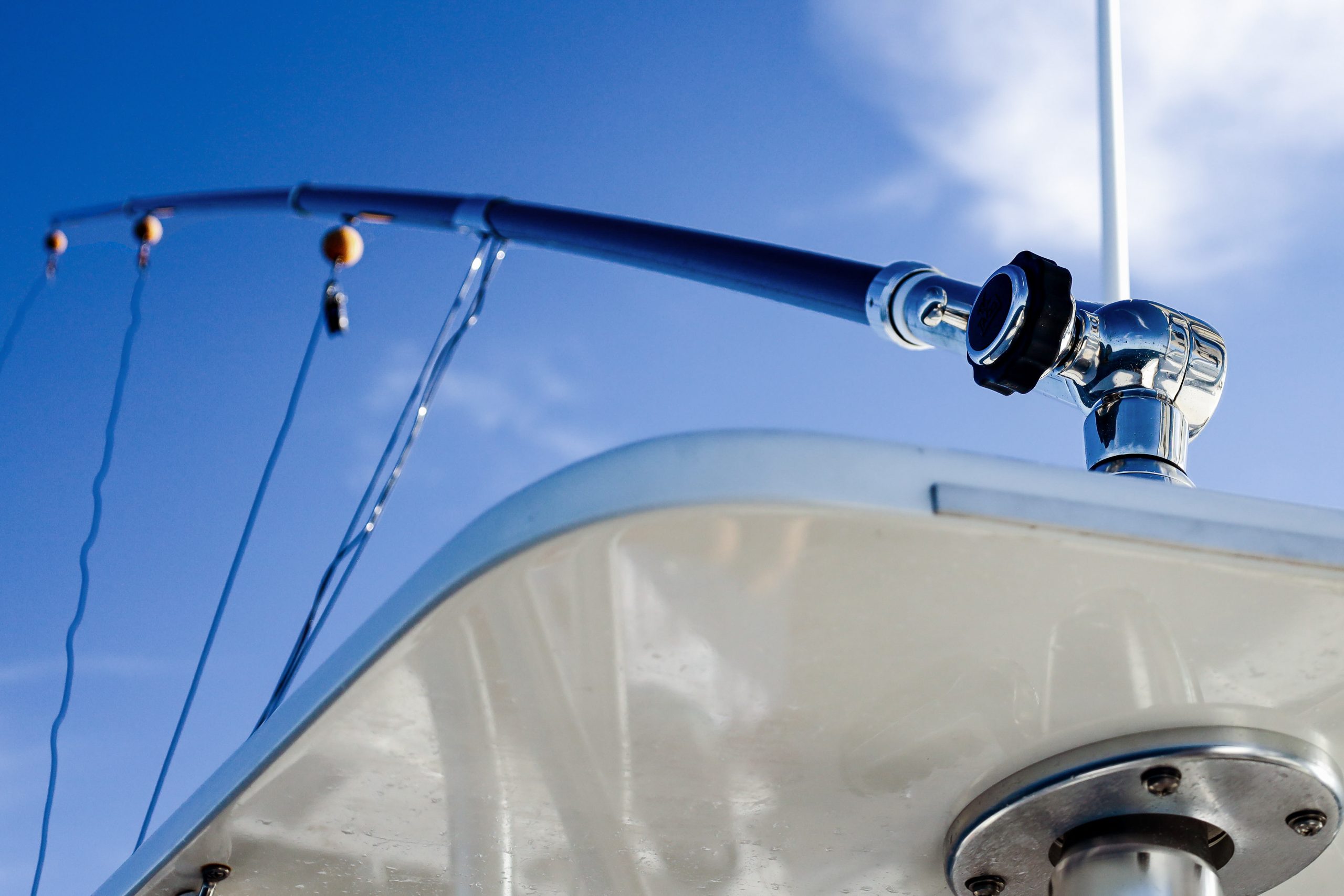 Rather than using outrigger poles that are challenging to set up or take down, the Ol Series from TACO Marine can be collapsed quickly and with ease.

TACO’s three-piece design features a patented latching mechanism that provides a twist and lock connection between each pole segment. Another innovative feature of these internally rigged poles is the ability to index the halyard line using the adjustable ratchet base/butt with a threaded locking collar, according to TACO Marine. 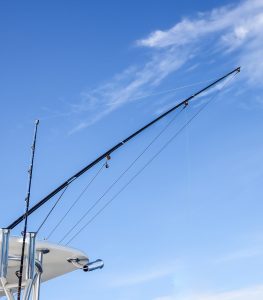 This design element eliminates chafing and ensures the smooth ascent and descent of outrigger lines. Additionally, each halyard line has its own internal tube running the length of the pole to its exit point that ensures smooth line operation with no tangling. TACO plans to offer a Tournament Series Rigging Kit with the outrigger poles.

Compatible with all standard 1-1/2 inch outrigger mounts, these poles come internally rigged with premium 400-pound mono halyard line in three distinct colors for easy identification of use. The poles have a one-year warranty and are available in 19’ and 22’.

Add a layer of security, and monitor and control functions on your center console from anywhere in the world with the new Marine Gateway from Dometic.

Marine Gateway marks the company’s entry into the Internet-based marine telematics market, a field that already has several players. The system is available to boat builders and boaters, perfect for retrofits of older boats.

When the vessel is connected to Wi-Fi or LTE cellular, boaters can monitor critical functions such as the bilge pumps, tank levels and batteries. The information is available on a mobile app for Android and Apple devices. When on the boat, monitor and control functions are available Bluetooth. 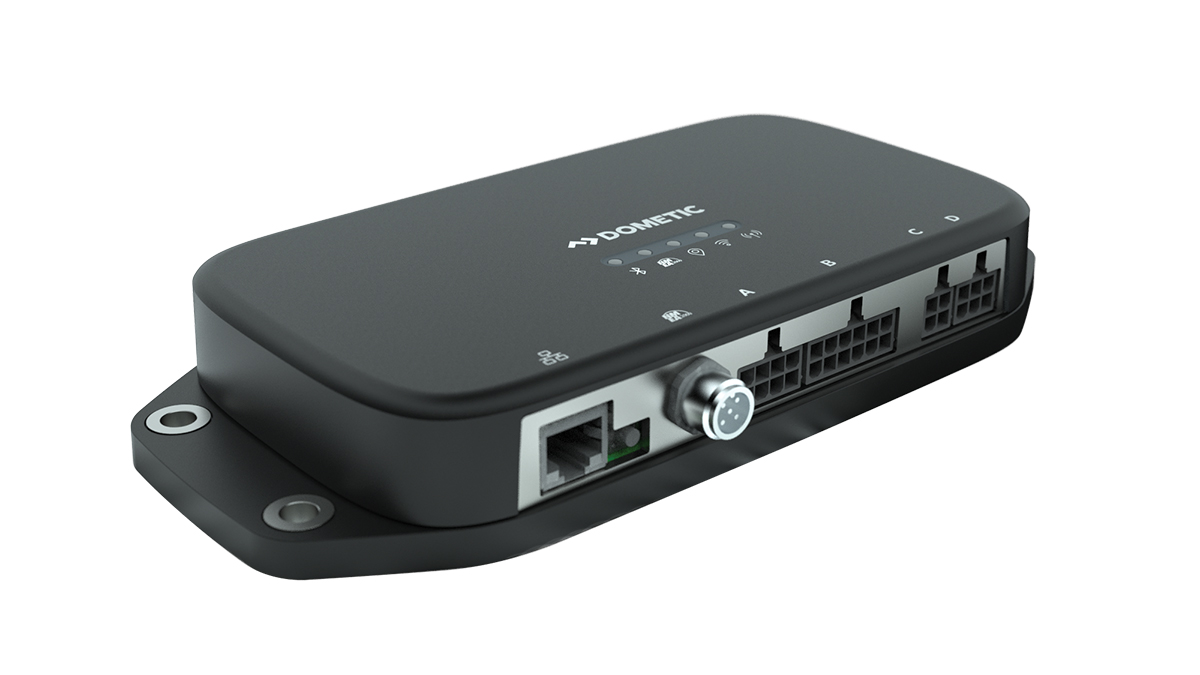 To provide security against theft or intrusion, Dometic offers reed switch sensors for doors, hatches and cabin windows. A special Security Loop to secure outboard engines and if it is cut, the boater will receive an instant alert.

Boaters can create a geofence protection for their vessels, alerting them if the boat has moved beyond the border. The owner can receive an alert if the boat drags anchor or drifts off its mooring.

Using external GNSS and LTE antennas, the Dometic Marine Gateway can easily be mounted in a variety of locations onboard. The system’s low power draw makes it practical for use during extended periods of storage, while its internal backup battery will keep the unit functioning if power is cut. The technology integrates into the Dometic DCM Digital Switching system.

Give your VHF radio a boost with a new 4’ Glomex RA300 Glomeasy VHF antenna. The antenna from GA Communications is engineered for maximum long-range transmission and reception.

While many boaters carry a mobile phone on board, it’s not always reliable especially traveling deep offshore. A VHF radio is vital link to shore and other vessels in the area.

The Glomex RA300 antenna has a frequency range of 156/162 MHz with a 3dB average gain. With a maximum input power of 100W and 50 ohms impedance, GA Communications says it’s vertically polarized to minimize signal reflection on the water. 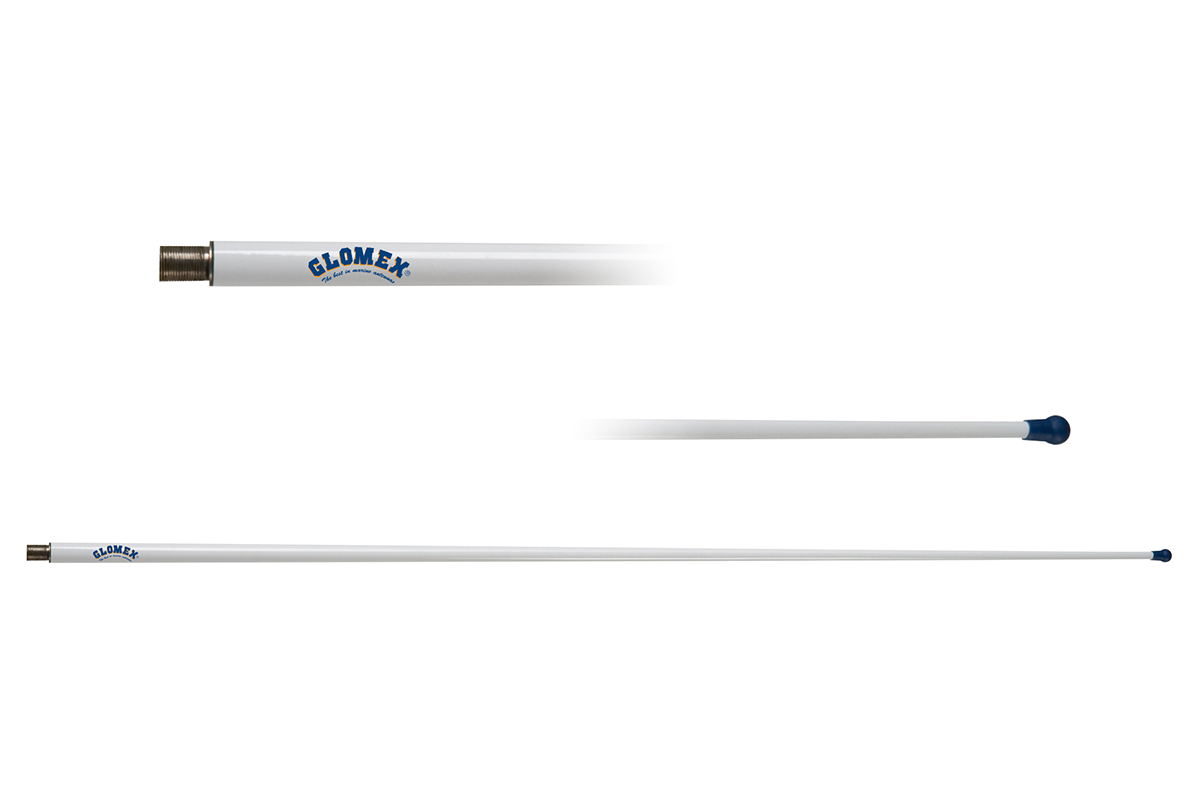 The fiberglass tube, which is backed by a lifetime guarantee, is highly resistant to stress and painted with a special anti-yellowing white paint. An FME connector makes for fast and easy installation. The 5/8” x 24” threaded ferrule fits a wide range of universal mounts including the highly adaptable Glomeasy RA107SSFME using the RA358 adapter.

The whole setup is relatively inexpensive–$205 for antenna, mount and adapter—for added safety on the water. Glomex also offers matching FM and AIS antennas in its Glomeasy line. www.glomex.us

Music on the Go

The portable speaker from PopSpec Electronics is completely waterproof and perfect for sandbar and beach excursions. It’s Bluetooth 5.1 enabled and can play music for up to 12 hours. It takes 2-1/2 hours to fully recharge. 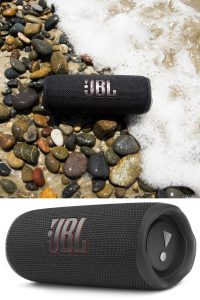 The Flip 6 is available in nine colors and retails for $129.95.
www.prospecelectronics.com

Lithium batteries can be found on handheld devices from mobile phones to toys such as drones. Increasingly, lithium deep-cycle batteries are powering air-conditioning systems, trolling motors and electronics. 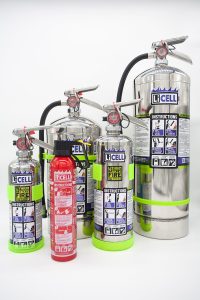 When a lithium battery cell fails, the heat generated transfers to neighboring cells. This can cause a cascading—combustion sequence called thermal runaway.

LiCELL extinguishers use Aqueous Vermiculite Dispersion (AVD) a suppression agent, which encapsulate the fire source. This provides a non-flammable oxygen barrier that smothers flames while delivering a cooling effect to halt thermal runaway. The AVD agent is non-toxic and environmentally safe.

LiCELL AH Series refillable handheld extinguishers have stainless-steel cylinders and are available in 1-, 2-, 6-, and 9-liter sizes. They have discharge times of 25, 50, 120 and 180 seconds, respectively, and a range of 6-1/2 feet. Sea-Fire Marine plans to offer a fixed system in the future.

It’s conventional wisdom that following the birds offshore will lead you to the bait fish and ultimately the fish you are looking to catch.

Simrad Yachting recently released two high-performance radars, the new HALO 2000 and HALO 3000. What caught our attention is the new Bird+ Mode on the HALO 3000 radar that focuses 130 watts of power on targeting and identifying flocks of birds up to 8 nautical miles. 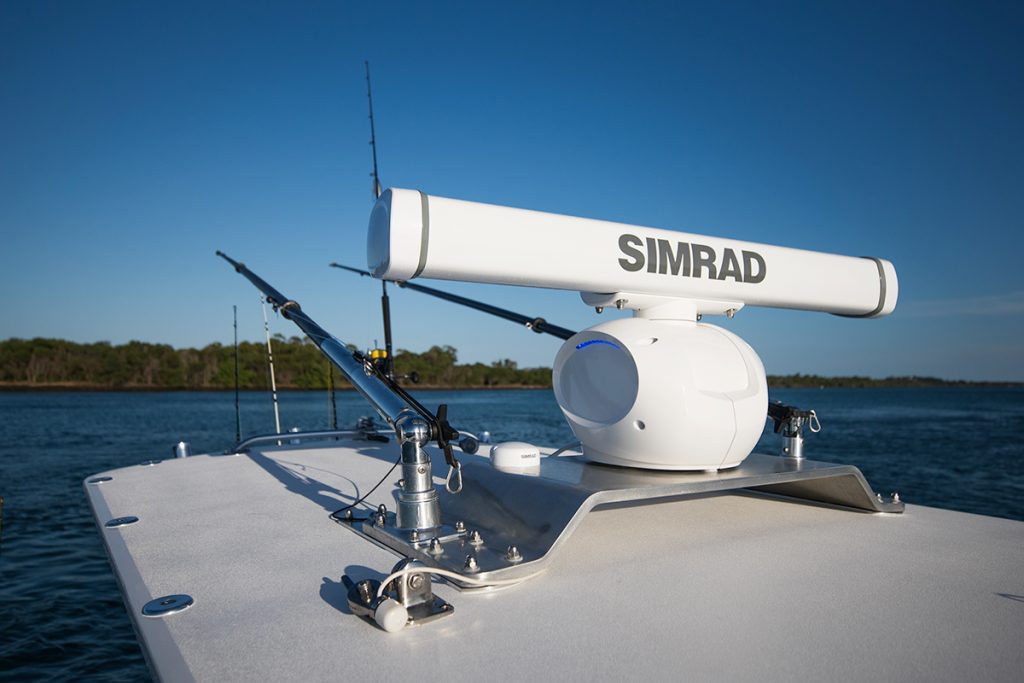 While the technology isn’t new, the HALO 3000 takes it to the next level. Radars are asked to do a lot whether it’s sweep for weather, navigational safety or hone in on birds.

“Whereas for bird finding, you are trying to find weak targets, so you want to slow rotation rate to get more hits (or energy) on target. These are kind of conflicting requirements, so you’re asking the radar to do these things at one time.”

“It’s not reliant on new tech or anything, it’s just our proprietary way of shaping the pulse,” Bates said. “Our competitors have bird modes as well and their own pulse schemes, but the (pulse schemes) are like the magic sauce in radars.” 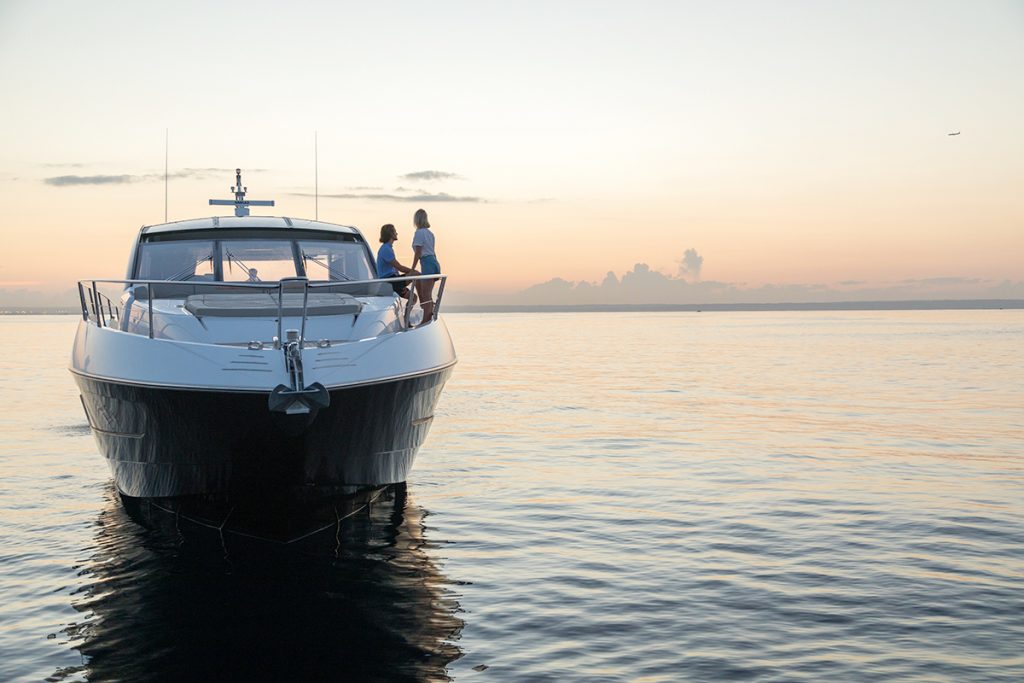 Most boaters are using the technology for collision avoidance, forecasting weather and to help with navigation. The new HALO 2000 and HALO 3000 feature high power pulse compression and improved detection ranges.

The HALO 3000 has 130 watts of power that provides visibility out to 96 nautical miles, while the HALO 2000 has 50 watts with a visibility range of 72 nautical miles. The HALO, for example, has 25 watts more power than the previous generation.

Additional technical upgrades include ZoneTrack, which is an automatic radar target tracking feature. It can track and follow up to 50 objects in a designated area. The Dangerous Target Alerts feature highlights the range, showing the bearing and heading of other boats. Velocity Track will illuminate targets in a color code to identify potential threats at a glance.

While the new radars are aimed for the new boat market, the HALO 2000 and HALO 3000 can be retrofitted on older center-console boats. The radars have the same footprint as the legacy HALO radars using the same bolt holes, radar interface box and processing box. Bates said everything inside the pedestal is new. 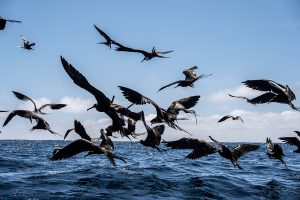 Compatibility is the biggest concern between the radar and multifunction displays. While radars are typically replaced every five to seven years, touchscreen displays have a shorter cycle of three to four years.

“We do try and cater to (the retrofit market) both in terms of making it simple to install the new product and compatibility with legacy generations of (multifunction displays),” Bates said. “We’re not going to go back too far and that’s partly because of the extra overhead and managing the ongoing software releases of OLED display products, so it’s just a bit of a balancing act.”

The HALO 2000 can use the existing HALO cable, but the HALO 3000 requires a new cable, Bates said.

“The new cables have thicker cores and extra cores to carry higher voltage, which means that we’re less concerned about voltage drop on the cable,” he said.