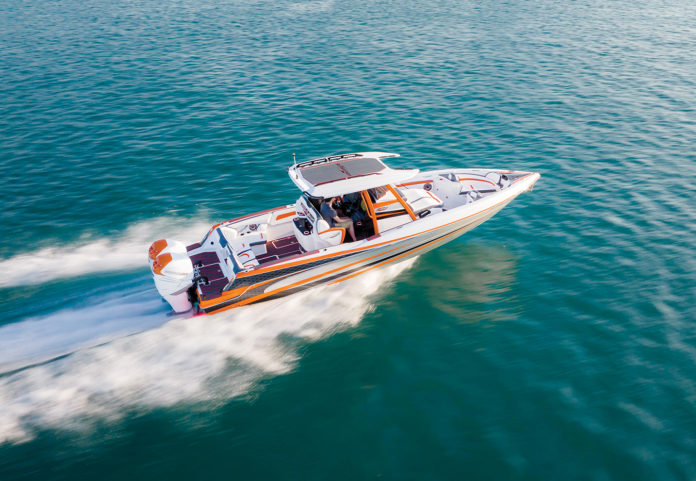 Over the years boatbuilders have come and gone, yet Sunsation Powerboats remains a constant in the industry.

The Algonac, Mich., builder is celebrating 40 years having successfully navigated the peaks and valleys of the marine industry. Founded by Wayne Schaldenbrand in 1982, he was quickly joined by his brothers Joe and John as they started building sport and offshore boats and then pivoted to performance center-console boats.

With three center-console boats from 32 to 40 feet, the Schaldenbrands and its 50 employees are keeping the boatbuilding tradition alive.

It was a smart but tough decision and one of the reasons why Sunsation Powerboats is celebrating 40 years of building boats. Sunsation’s plant is just down the street from where Chris-Craft Boats were built until 1974 and their grandfather worked for Chris-Craft.

Center Console Life Magazine recently caught up with Sunsation owner Joe Schaldenbrand to talk about the company, his family and where he thinks the industry is heading. The questions and answers have been lightly edited.

Do you feel like you’ve been in the marine industry for 40 years?

Joe Schalendbrand: Not really. Things are going really well right now. We’re really enjoying a lot of success that Sunsation is going through. The only time it really feels like 40 years is when you look back at product that you made in the late ’80s or even early ’90s and it’s like, ‘Holy smokes, we really have come a long way.’

We’ve built a lot of boats and what’s amazing is we still get customers that their boats are 30-some years-old or 35 years old and they still have questions or want to know where to get parts and things like that. We still take care of them.

What inspired you, Wayne and John to go into the boat business?

JS: Back in the early age, Wayne was buying boats, different boats brand new and none of them met his expectations. They had problems with them, they weren’t built how he thought they should be, didn’t go as fast and he would go through and just kind of refurbish them all.

Over time, I think (Wayne) realized that he can build a better boat than you can really buy on the market. Even before that, I can remember him dragging stuff home that half the side was burned out of an older boat, he’d refurbished the whole thing and he would revive it. That’s where a lot of that really started, then he ended up buying some new stuff and then building our own.

That’s why they always say we build boats worth owning because nobody built the boat that would withstand what we wanted it to.

Can you talk about Sunsation’s relationship with Performance Boat Center?

JS: They are a great dealership. The thing with Performance Boat Center (in Lake of the Ozarks) is their professionalism from the beginning of the order to delivery, the way they take care of the customer and just their follow-through throughout.

They’re a five-star dealership and I’d give them six stars if there was six stars. And even the service, the delivery after the sale is phenomenal and they really capture that as well. What Performance Boat Center really likes doing is selling that (customer) the boat, but then in two or three years, when he wants to trade up, they like taking that trade in and turning around and selling him another boat as well. 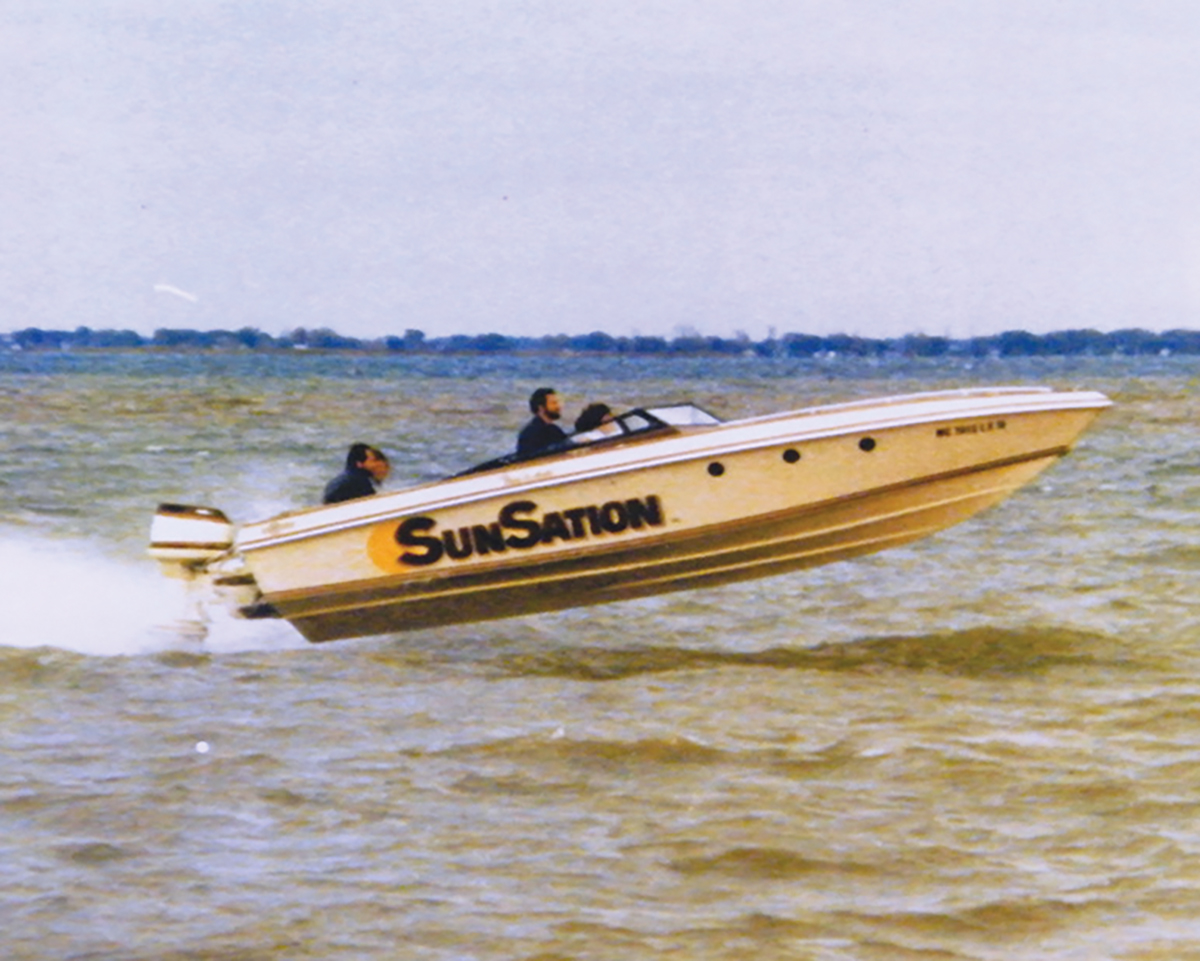 Most of us remember the days when you built offshore and sports boats. When did you make the crucial decision to go into the center-console market?

JS: When the economy crashed in 2006-07 and everything really went down, we looked at it and saw the trend going towards the center consoles. So, we grabbed every boat we could and drove and rode in center consoles.

We have friends that would take us out. We’d spend numerous hours on the boat, driving, riding, turning, handling, how well do they back up. To be honest with you, I don’t think we liked a single one of them.

The problem was we were in a different market, and we recognized that those were all fishing boats. All the center consoles prior to a sport boat manufacturer entering into the market were fishing boats. I actually renamed them. I refused to call our boat’s center consoles and I prefer to call them sport consoles because we’re sport-boat guys that are building center-console boats.

In the early days, the Schalendbrands were hands-on from waxing the molds to laying up the boat...
1 of 2

Do you feel the decision build center consoles saved the company?

JS: It did because the sport boat market pretty much went away. You saw it, everything went toward outboards and center consoles, and thank God we did that. While the economy was down, we retooled and went out and we presold some (boats), so we knew as soon as we had this tooling done we had orders. So that’s what we did in the downturn. We didn’t just sit back. We were proactive and redesigned and came out with the sport consoles.

Were you able to adapt the bottom design from your sport boats for the center-console models?

You’ve got a couple big guys walking through side to side, it’s just not as stable as you want it to be. The bottoms we use on the sport consoles are not the same as our sport boats, they are wider.

JS: I am. It changed boating quite a bit because now if I’m going out in a boat and I have six people with me and just before you take off two or three more (people) show up, you just tell them to get in. You can take seven, eight, nine people with you with ease and it’s enjoyable.

Do you see sport boats coming back anytime soon?

I do think the sport boat will come back. People want that look, but they aren’t willing to do all the maintenance and spend the money for upkeep each year. I think that market will come back.

Center consoles to me are great, but that market is pretty close to being saturated. There is so many of them out there. As a manufacturer, you’re always looking around the corner—what’s ahead and what’s coming out. Sunsation already has a pretty good idea.

How was Sunsation able to overcome the challenges from the supply chain to labor issues during the pandemic?

JS: I still went to work every day. I took every order that we had and unloaded the trucks. If you totally shut down and you didn’t get your supplies, you were in trouble. I ended up with probably 30-some motors in stock and I had them stacked up everywhere. I had the windshields, I had all the parts that we needed. We kept that whole logistics moving forward and accepting them because if you rejected the order like everybody else was doing, you wouldn’t know where your motors were because the warehouses were so jam packed.

We stayed very proactive with that and it helped us out tremendously by having a skeleton crew there that could unload every truck and continue to order things when you needed them. We knew it was going to come back. We just didn’t know exactly when, but we wanted to make sure we had the supplies so that when we could go back to work, you would have everything to put the boats out.

What are some things people don’t know about owning a boat company?

JS: What the people think, my neighbors included, is that it’s so glamorous and what I do has to be the best and (fun) job ever because all they see is what the magazines print and all we’re seeing is the highlights and the customers and the traveling.

What people don’t realize is what it takes behind the scenes to run at a successful company. I return every phone call that comes in here every day and have all the different meetings that you do. You’re running a strategic business in the background, building a high-end product, keeping all the employees happy and staying up with insurance and all the other stuff. stuff.

At the end of the day, you have to have a very strong, powerful team behind you. When I go to a boat show, everybody walks up and says, ’Wow, Joe, you build the best boats ever.’ I always correct them and say, ‘I don’t build them, my team builds them.’ They deserve the kudos because they’re in the background really making it happen.

I’m just the guy out there promoting it and showing it to everybody. I don’t actually build all the boats, they do. That’s what people don’t realize.

A new hull is being laid up and the work must move quickly before drying. A Sunsation employee ...
1 of 3

Having worked all aspects of the business, what’s been the biggest change for you?

JS: I think the boats have superseded me as far as technology, programming everything, programming the Garmins, programming all the Mercury stuff and whatnot. I can go test any boat and I can tell you how it drives, rides and handles but I have to bring technical people with me to do all the programming.

These aren’t gauges anymore. You’ve got dual screens and everything has to communicate. I couldn’t do it all again without the team that you have. The plus side, we barely bring tools with us when we test a boat nowadays.

How many more years do you see yourself staying in the marine industry?

JS: What’s happened lately is that we’ve hired some people to take over some of my responsibilities and assist in the sales, marketing, advertising and things like that. There are two individuals that we brought in here that relieved most of my responsibilities that I used to do day to day. Now I’m running the company from the top and basically steering the ship from the helm.

We’re aligning Sunsation to continue long after Wayne and I are going to be involved in the company, which both of us have several more years that we’ll be owners and be involved. Maybe not day to day, but in the long run this company will survive past us. And that’s a great feeling.