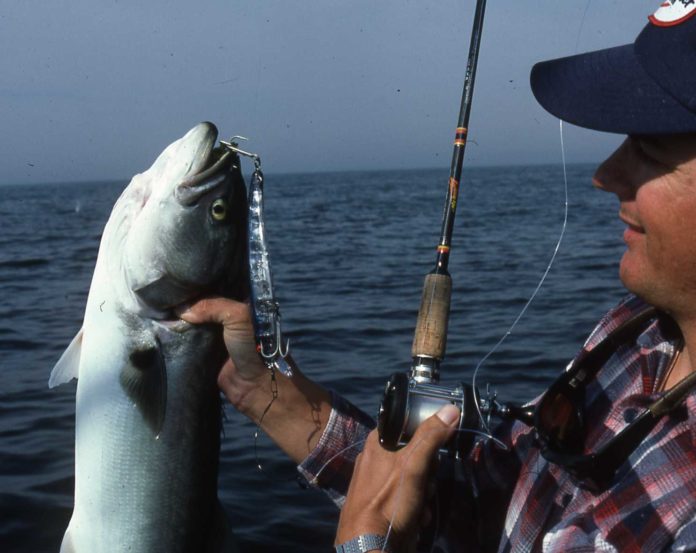 Ultralight tackle may have a place in saltwater, but it’s not for everyone and it doesn’t work in all situations or for all species. Here’s why.

It happened a number of seasons back. Two freshwater ultralight aces from the Midwest wanted to “put the hurt” on some striped bass, and called me one evening to set up a trip for the following weekend. The guy on the phone seemed to have all the answers.

“Heck,” he told me, “Me and Wally take loads of big smallmouths and walleyes on 2-pound line, and last spring I got a pike the size of my leg on 4-pound. We know what we’re doing. You just put us into the bass and we’ll do the rest. We’ll even bring our own gear.”

Wally and Dave arrived on the appointed morning, bristling with rods and loaded down with tackle boxes. They were certainly congenial enough, and after some quick pleasantries we pulled away from the dock and headed out.

Bingo! We suddenly came upon a half-acre of school-size stripers feeding on top. There were boils and splashes everywhere. Dave dug into one of his boxes and pulled out a tiny jointed swimming plug, about the right size for a 10-inch brook trout. He tied it on to his line with amazing speed, picked up his 5-foot spin rod, and fired the lure off into the gentle morning breeze.

The tiny balsa minnow disappeared into the air and then zinged back past his left ear and wrapped itself around the VHF antenna.

“Wind’s a bit too much,” he grunted. “Got anything heavier I can throw?”

I rummaged around and found a 3/4-ounce topwater popper, and handed it to him. He tied it on and cast mightily. The reel’s bail clicked close as the plug ascended, followed by the sharp snap of the line. The lure sailed out of sight.

That’s how the day started. By noon the deck was littered with empty lure cartons and blister packs, along with birds’ nests of discarded premium line. Dave’s and Wally’s tackle boxes looked like tornados had gone through them, and I figured I had donated at least $40 worth of lures to the cause. And we hadn’t brought one striper to the boat.

Humbled, the two anglers headed up the ramp that afternoon with looks of sheer frustration. They said they’d be back, but so far I haven’t heard from them.

Ultralight tackle may have a place in the salt, but it’s certainly not for everyone and it doesn’t work in all situations or for all species. There’s definitely a satisfying feeling when you whip a 10-pound striper, redfish, or snook on 6-pound spin gear, but there are some aspects that deserve a little consideration.

First off, there are fish that you’re going to have a difficult time with if you use 2- through 8-pound line, and you’ll likely break off more than you’ll land. A deep-water bottom fish might be hooked on super-light line, but it’s another job to winch it to the surface. You just can’t exert much pressure with 8-pound line on a 20-pound grouper or 10-pound mutton snapper that’s battling you 100 feet below the surface.

Midrange fish such as stripers, blues, reds, seatrout, and seabass can indeed be taken on ultralight tackle—my experience with Wally and Dave notwithstanding—but moderation is the key. If you have some experience and are careful, you can land good-sized gamesters on 6-pound freshwater gear, no problem.

There are trade-offs, though. A striper or red that’s allowed to fight for 20 minutes at the end of a 4- or 6-pound tether isn’t going to be in very good condition when it’s released. Species such as bonito, yellowtail, false albacore, and Spanish mackerel need lots of oxygen, and the longer their movements are restricted when fighting against light tackle, the greater the chance they’ll suffer from exhaustion and oxygen deprivation damage.

If you’re into catch and release, use tackle that will subdue your quarry within a few minutes. Ten- to 17-pound gear is about right for the majority of inshore game fish, although I’ll sometimes drop down to 8-pound line if most of the fish are running in the 3- to 10-pound range.

Put the Brakes on Break-Offs

Break-offs pose other problems when using ultralight tackle. Losing a $10 plug is never fun, especially when compounded with the knowledge that there’s a fish swimming around with a face full of treble hooks. And, contrary to popular opinion, fishhooks don’t “dissolve” in a couple of days. That lure or hook can stay in the fish’s mouth for months and impede its ability to feed.

One way to help prevent break-offs with light line is to use 3 or 4 feet of slightly heavier mono or fluorocarbon as a shock leader.

When I fish 8-pound line for schoolie stripers, I tie in a length of 20-pound fluoro, which I attach directly to the lure. The 20-pound takes far more abuse than does the 8-pound, and I rarely break off.

I’m going to stick my neck out and state that I don’t think 2-pound line has much business in most saltwater situations. Yes, I fully realize that the International Game Fish Association (IGFA) sanctions 2-pound test as a line class for records, and there have been some amazing catches such as a 126-pound blue shark, but is this really sport fishing? Or is it stunt fishing? You decide.

Don’t get me wrong, I’ve been a proponent of light tackle for decades. But light tackle is one thing, and ultralight is another. If you can’t land a fish in a timeframe short enough so that it’s still lively and healthy when released, or you’re breaking off more than 10 percent of the ones you hook, then you’re likely using gear that just too light for the job.

So, unless you’re seriously looking for a place in the record book, you might want to step up to slightly heavier tackle better suited to give you the maximum enjoyment. And, you’ll likely give that fish a better chance to fight another day.