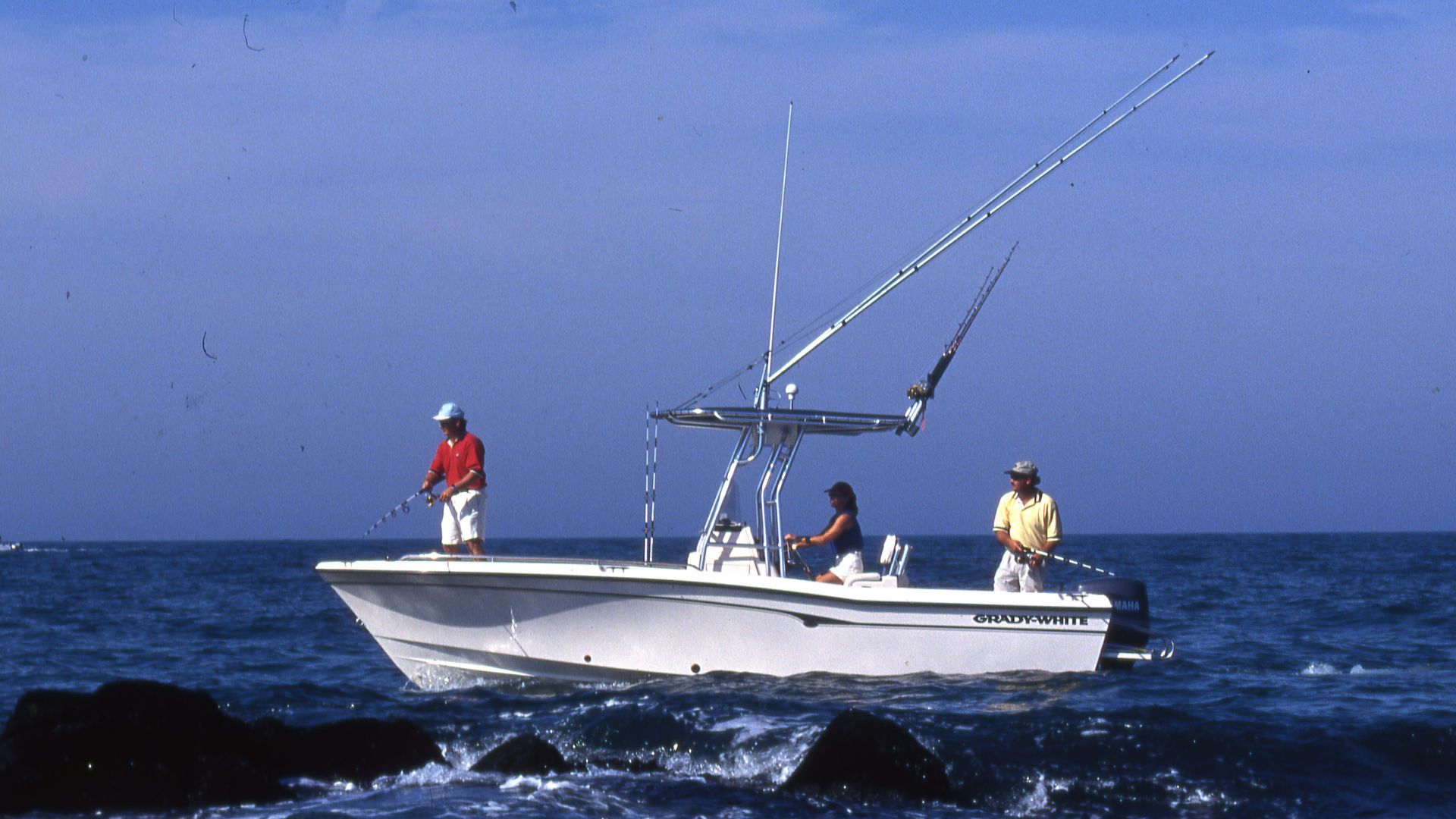 The Boston Harbor area is loaded with striped bass of all sizes that can be targeted with a variety of effective tactics all season long.

Boston-area boat anglers have it pretty good these days. Not only is the harbor cleaner than it has been at any point in the last 100 years, fishing for many species has improved dramatically.

Striped bass the headline act, and fishing for them gets in early e big bass move in when the alewives and herring get here, which is typically around Mother’s Day,” says Everett tackle shop owner and all-around Beantown angling guru Pete Santini. “After it gets better and better, especially when the mackerel show up.

Primetime runs from the second week in June through mid-July.” Santini and other local sharpies usually rely on live mackerel or menhaden (a.k.a., bunker) when targeting trophy bass. Good spots to fill a live well with macks include the G “5” buoy out by Graves Light and the “BG” buoy. Martins Ledge, Three-and-a-Half-Fathom Ledge and the G “2” can off Nahant’s Bass Point are other spots to look for bait.

With a good supply of live bait, be it mackerel or menhaden, you can fish them just about anywhere in and around the harbor, which is loaded with prime striper structure, including rock piles, drop-offs ledges.

A dependable spot for big fish is Broad Sound, near the harbor’s northern entrance, which comprises a series of humps that rise from 70 feet of water to around 40 feet. To fish this area, Santini slow-trolls his baits on lead-core line. He hooks the bait crosswise through its nostrils on a 3/0 3X-strong treble hook tied to 5 feet of 50-pound-test fluorocarbon leader. He then lets out three or more colors of line, depending on the water depth and the strength of the current.

With the bait swimming just above , Pete sets the reel drag just heavy enough to keep from flowing off the reel then places the rod in a holder while trolls at around 2 knots (the slower the better). When a fish picks up the bait and begins taking , he waits a full 5 seconds before engaging the drag and letting the rod double over.

Broad Sound isn’t the only place that holds big bass. Other spots to slow-troll baits include the northern tip of Long Island, the “Narrows” between Lovells and Gallops Islands, the stretch of water from Winthrop Head past the Five Sisters to Cherry Island Bar, and the waters off Point Allerton in Hull. These are shallower areas—8 to 30 feet—so you don’t need as much weight or lead-core line to get the bait down to where the fish are holding.

The tip of the Long Island Pier, the rocks surrounding Spectacle Island and Peddocks Island, the rocky bar off Nixes Mate, Faun Bar, and the area around the Fore River Bridge in Quincy also produce fish for both trollers and those who like to cast live baits among the rocks as they drift. With the latter technique, suspending the bait below a balloon can help keep it above the weeds and rocks.

For those who prefer a light tackle, tossing plugs and big flies into rocky spots in 5 to 15 feet of water can produce fish as well, particularly on an early-morning rising tide. Proven lures include soft-plastics such as the Slug-Go, Hogy, the Savage Manic Prey in blue or green mackerel, the Storm Wildeye Swim Shad, and the Rebel Pop-R.

Another deadly tactic, although not employed by most striper anglers, is to troll a big wooden swimming plug such as a Danny Deep Diver or Soldati Giant Pike at night over the reefs and ledges in 12 to 20 feet of water.

You’ll need a good knowledge of the harbor’s bottom and 50-pound conventional tackle, as many of the fish taken this way run 30 to better than 50 pounds. As spring moves into mid-summer, striper action often tapers off for a bit, but dependable action can be had with Boston’s bruiser bluefish.

Finding them is usually a matter of heading to the Graves or the RW “B” Buoy and trolling a mackerel-pattern Rapala X-Rap on three colors of lead-core line or 150 feet of wire line. Naturally, you’ll want to use a wire leader ahead of the plug to prevent cutoffs. After a couple of battles with these six- to 15-pound fighters, you just may temporarily forget all about the bass!