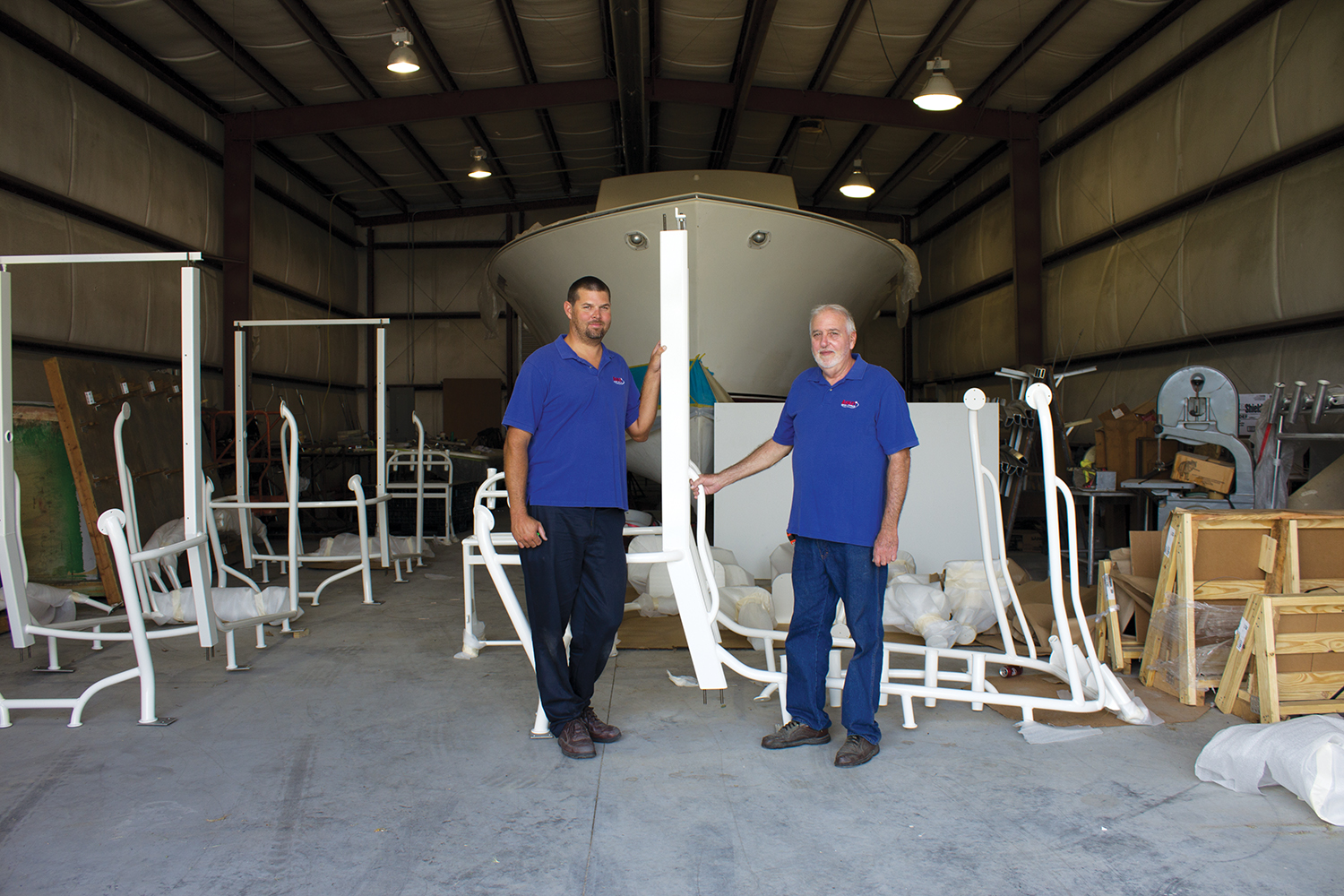 Ashley Welding has established itself as one of the premier builders of hardtops and towers for performance and fishing boats.

Steven Byrd knows that when a boating enthusiast is spending hundreds of thousands of dollars on a boat, the smallest details can make the difference between a successful transaction and a canceled one. That’s why Byrd and his crew at Ashley Welding take extra care when it comes to making sure the welds on all their marine products look top-notch.

One of the companies building those boats is Sunsation Powerboats and company president Wayne Schaldenbrand had nothing but positive things to say about Ashley Welding. “They’ve got some really nice welds and it’s a very professional company,” said Schaldenbrand.

Ashley Welding is based in Edenton, N.C., and the company builds T-tops, seat frames, towers, engine mounts, bowrails, struts, rudders, shaft logs and other parts for an array of clients including Susation, World Cat and Edenton Boatworks, which builds Albemarle and Carolina Classic boats.

The company is owned  by Steven and his father Mitchell Byrd, who is the president. In addition to the marine work Ashley Welding also makes conveyor belts and other equipment  for the  peanut industry. Mitchell, 61, runs the non-marine side of the business while Steven, 33, manages the boating side. Steven  started  at the company when he was 18. His father was the vice president at the time and he taught his son the finer side of welding. Eventually Mitchell bought the company and in 2012, Steven bought a percentage as well.

“When I started, the economy was booming and all we did at that time was something related to a boat,” said Steven Byrd. In 2008 and 2009, when the economy slowed, father and son got creative and drummed up work with the peanut businesses to keep the doors open. Diversifying actually made Ashley Welding stronger and the company has 15 employees working in a 22,000-square-foot shop. There’s another 80’ x 40’ storage building on the property.

On the marine side, the company’s bread-and-butter product is hardtops and T-tops and for larger 32’ and 36’ fishing boats. Ashley Welding also fabricates tuna and cobia towers. Because the company is big enough to keep up with demand yet small enough to handle special projects,  Steven  Byrd can take on custom work. He recently redesigned a tower for Albemarle with a lot of curves and rakes in keeping with modern styling. “Our first priority is to make it strong,” said Byrd. “Everything is going to curves and rolls,” he added when describing the styling. “We want to make it look fast sitting still.”

One current design trend that Byrd likes is the way companies like Sunsation are integrating the hardtop and T-top bases into the consoles to maximize cockpit space. “When everything is tucked in tight, it’s a cleaner look,” he said. “They want it strong, but if you can get away with less structure, that’s where the design is headed.”

On most boats, Ashley Welding builds towers and T-top frames from 2” diameter aluminum tubing. Byrd draws out all the designs by hand and because he works closely with the manufacturers, he has earned their trust when it comes to new designs. All the joints are tig-welded to produce the clean look that the company is known for.

When he’s not welding, Byrd enjoys boating with his wife Stephanie and three daughters, Whitney, 17, Madison, 14 and Karley, 11. He had a Regulator 26’ center console until he recently sold it and is boat-less right now. In his spare time, Byrd fishes off the Carolina coast to for tuna, dolphin and marlin.  He’s planning to enter some tournaments this year.

As for the future of Ashley Welding, the plan is pretty straightforward. Keep building quality products and maintaining strong relationships with their customers. “We’re a small-town company,” said Byrd. “We work hard and we’re proud of what we do.”