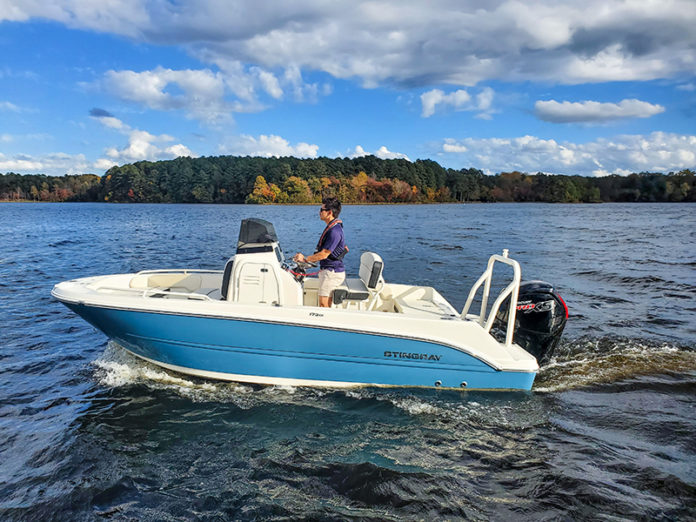 The South Carolina builder delivered with the 173CC and its new flagship model the 273CC, which is now the largest model the company builds. Both hulls are based off Stingray’s patented Z-Plane hull, which improves performance without sacrificing handling. 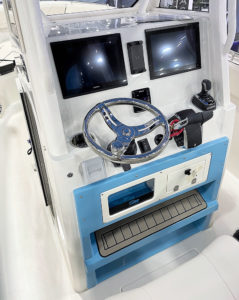 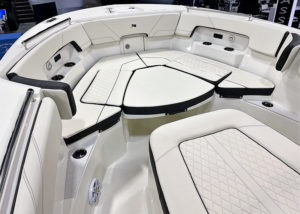 Although the 273CC won’t go into production until July for the 2023 model year, Stingray Boats wanted to unwrap the center-console for the international audience in Miami. The model didn’t disappoint, especially with a starting price of $196,750 equipped with a pair of Suzuki DF200 outboards. Power options are also available from Mercury Marine and Yamaha with a maximum of 600 horsepower on the transom.

With a narrow beam of 8’6”, anglers still have plenty of room to move around the center-console boat. Anglers will appreciate the aerated livewell, two insulated fish/storage boxes and the freshwater system to clean the boat after a day on the water.

The sturdy hardtop can be equipped with an optional Gemlux Deluxe Outrigger package and the rear-facing seat can be upgraded to a livewell. Standard features at the driver’s spot include a Garmin 1243 screen and transducer and a Fusion stereo. A glass windshield protects the pilot and driver from the elements.

Stingray included a small head compartment under the console with a toilet and a freshwater sink. Just in front of the console is a lounge that can sit one or two people with armrests that drop down.

The new 173CC introduced at the Miami Boat Show is targeted at the first-time center-console buyer. The boat starts at $35,342 with a Suzuki DF90 outboard and for anyone who has checked new boat prices lately, the 1733CC is a rare find.

The 173CC comes loaded with standard features including an aerated livewell, backlit gauges, 68-quart cooler/storage box with overboard drain, Fusion RA-60 stereo, stainless steel rod holders and a removable windshield. Buyers can upgrade the dash with displays from Garmin, Yamaha, Suzuki or Mercury Marine. An optional  blue LED underwater lights package give the 1733CC a high-end feel at the docks in the evening.

Base power is the Suzuki DF90 and buyers can upgrade for $2,500 to either a Yamaha VF90LA outboard or a Mercury Marine 90CT outboard.

Checking in at 17’3” with a beam of 7’6”, designers packed a lot into the 173CC. The boat can seat up to seven people and no space went unused for stowage or lockers. Because the 173CC will likely see double duty as a fishing boat and a family tow boat, Stingray offers an optional ski-tow package and upgraded stereo system.

The small console has a portside entrance and can be equipped with an optional Porta-Potti with a dockside pump out. It’s a worthy investment, especially for a family with young children. A small seat in front of the console had a cooler underneath that can be used as a livewell, if needed.

Stingray Boats entered the center console and deck boat market a few years ago and it’s taken the company to new levels. With the new 173CC and 273CC, it easy to see why.

Editor’s pick: On the Wave with New Electronics