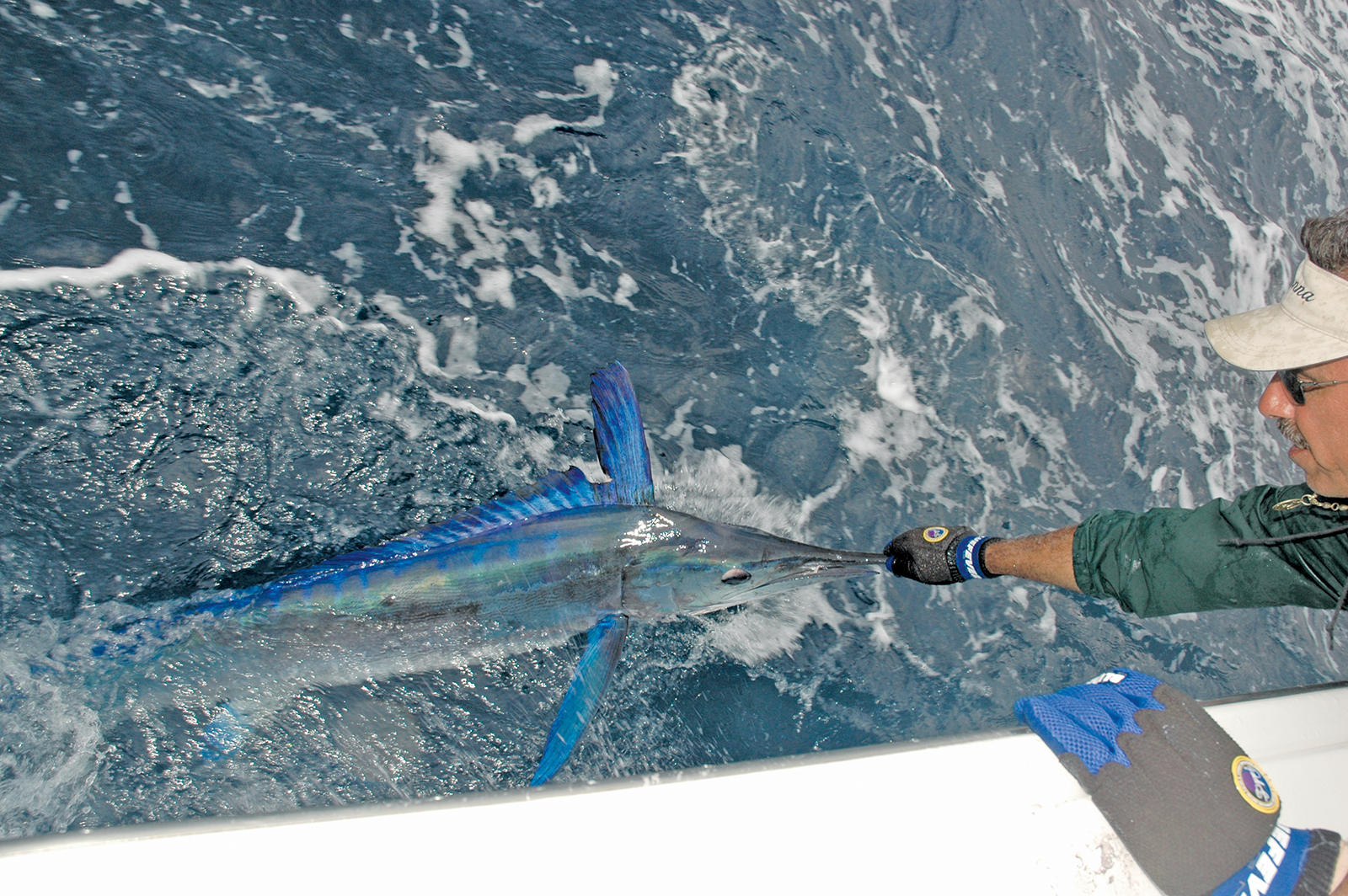 With the eyes of a boxer staring down his opponent at weigh-in, Jerry’s attention was focused aft on the trolling pattern from the tower of the 41-foot center console as he looked for the first hint of a billfish rising in the spread from the depths of the cobalt blue water. Glancing at the flat lines, short ‘riggers, long ‘riggers and shotgun line, he noted the action of each lure as it broke the surface then disappeared underwater creating a smoke trail of bubbles.

Suddenly, “Right short, right short, blue marlin, blue marlin!” came the yell from the tower, and the snap of the ‘rigger clip followed by the steady clatter of the lever drag reel signaled the hookup. Quickly the crew maneuvered around the cockpit clearing lines while Alfie removed the rod from the rod holder, donned the gimbal belt and shoulder harness, and settled in for the battle as line exited the 50-pound class reel.

“She’s takin’ quite a bit of line, Jer’,” Alfie relayed as he attached the harness to the reel lugs. “That’s OK, we’ve got plenty of string on that reel,” noted Jerry with confidence as the blue marlin took to the air and greyhounded across the surface before turning and streaking towards the boat. “Wow, look at her go!” exclaimed Bill while Alfie retrieved line at a feverish pace. After another round of aerial acrobatics followed by a series of drag-searing runs lasting more than an hour, Jimmy grabbed the leader, removed the hook, placed The Billfish Foundation tag into the fish, and set the marlin free. “Pretty work guys, nice fish, 300 to 350 pounds, I’d say,” acknowledged Jerry from the tower as the crew passed around high-fives.

It’s hard to imagine an area in the Atlantic that offers a better opportunity to score with billfish during the spring season that is so close to the United States mainland as The Abaco chain of The Bahamas. This necklace of tiny islands lies approximately 175 miles from Palm Beach, Florida and stretches nearly 130 miles from Walker’s Cay in the north to Hole-in-the-Wall in the south. Large center consoles with generous fuel capacity can easily make the run across the Gulf Stream in the spring when weather conditions are generally more favorable. The Abacos are home to numerous secluded coves, uninhabited cays and beaches and colonial towns rich with the island’s history, and although they suffered severe damage from hurricane Dorian last September, the island’s resorts are rebounding and repairs are proceeding all across the region.

While The Abacos are indeed remote when compared to Grand Bahama Island, Nassau, and Paradise Island, you’ll find several first-class marinas with modern facilities, each catering to visiting anglers who arrive by boat or plane. Abaco Beach Resort and Boat Harbour Marina are among them, and although the resort and marina were hit hard by Dorian, much of the resort has been rebuilt and they are currently accepting reservations. As of this writing fuel is available at the marina along with most other amenities and services.

The Abacos are a magnet for billfish fanatics, and spring ushers in the beginning of the marlin season for many boats which spend the winter in Florida and points farther south. March through June is the best white marlin and blue marlin action, while March, April and May offers the best shot at sailfish, setting up the possibility of a Grand Slam for those who put their time in during the spring billfish run. Look for big dolphin and wahoo to fill the gaps between billfish bites. An abundance of tasty bottom species can also be found as well.

While billfish action in The Abacos can get downright hot in the spring with good numbers of sailfish and marlin seen and caught, another enjoyable aspect of the fishery is the short ride to productive fishing areas, with a run of over an hour considered long from most of the marinas in the Out Islands. An ideal destination for center console craft, you can set a course for 5 miles out of the cut at Man-O-War Cay and lower the ‘riggers in over 5,000 feet of water! The area is full of billfish-rich structure and names such as Jurassic Park, The Mushroom, Little Abaco Canyon, Wonderland, The Bridge and Great Abaco Canyon are all popular haunts for all three species of billfish.

Whether you’re a plastic puller or a natural bait nut, much of what has proved successful in your home fishing grounds will also produce when visiting The Abacos, and your trolling pattern and tactics should be dictated by the species pursued each day. When white marlin are thick, natural mullet and ballyhoo dredges trolled with skipping and swimming ballyhoo on 20- or 30-pound class tackle are a deadly combination just as they are everywhere else along the Atlantic coast. However, be prepared for blue marlin to show up quite a bit more often than they do anywhere along the US mainland.

Those who prefer to target blues pull a range of mid-sized to large lures. Color schemes and patterns that billfish prefer should match skipjack, bonito, mahi-mahi and flying fish, which are predominant forage species in the area. Keep in mind it also pays to have a ballyhoo pitch bait ready if a white marlin or sailfish shows in the pattern. Sailfish, though frequently caught in the spring, are typically not plentiful enough to target but are often a surprise catch for crews that have scored with whites and blues, providing the possibility of the elusive Grand Slam on any day. Look for sails closer to the beach in shallower water as opposed to offshore where blues and whites prowl.

A trolling strategy for white marlin and sailfish should include a mix of swimming and skipping ballyhoo as well as a Spanish mackerel for the guy in the blue suit. A mix of natural and artificial teasers in the spread is always preferred. With this pattern the theory is there is a bait in the pattern for each species of billfish found in The Abacos in the spring. Although some skippers prefer naked ballyhoo, many often add a skirt to help get a bite. The abundance of flying fish in The Bahamas makes a ballyhoo with a blue and white Hawaiian Eye a must in any trolling pattern. Daisy chain and large teasers are also popular since they raise white marlin and blue marlin with equal effectiveness.

The size of your center console will dictate the number of rods and teasers you can successfully manage in your pattern. Larger craft can easily pull a seven-rod pattern with long ‘riggers positioned on the fourth or fifth wake, and the short ‘riggers placed on the third or fourth wake. The flat lines are generally positioned about 25 to 30 feet from the transom where they are out of the prop wash, while a shotgun line is positioned slightly past the long ‘rigger baits, although not so far that the lure is out of sight. Trolling speed will vary by sea conditions and hull design, but consider 4 to 6 knots for white marlin when pulling natural baits and 6 to 9 knots when pulling lures for blue marlin. Baits should be positioned where they can be seen, while lures should be pulled on the face of the wake where they can break the surface, gather air and dive back under the surface to create a long trail of smoke.

After a long winter, most of us are itching to get offshore. The proximity of The Abacos to the East Coast of the United States combined with its fine fishing, both inshore and offshore, as well as beautiful beaches, excellent restaurants, shopping and golf, make the area popular each spring. Though The Abacos were hit hard by hurricane Dorian, the area has rebounded thanks to a strong recovery effort. If you plan to visit, do your due diligence so you’re aware of what’s available prior to arrival. Book flight and resort reservations early, especially during the popular tournaments because The Abacos is the place to be for billfish during the spring season!

For further information including updates on the restoration of the resort and marina visit www.abacobeachresort.com. You can also follow them on Facebook at www.facebook.com/abacobeachresort where updates are posted regularly.

For tournament information visit www.skipstournaments.com. For general information about The Bahamas including travel documents and advisories, airport status and fishing regulations visit www.bahamas.com