Do you aspire to become one with nature, to embrace water’s natural beauty? Meet X Shore, the Swedish company known for fully electric yacht tenders and the assertion that they have viewed the future, and it is eco-green.

Hence, the launch of its Eelex 8000, combining the speed of an internal combustion engine with the muted voice of an electric motor. This 8-meter open-tender affectionately derives its name from the South American electric eel, the resemblance seen in the hull form’s streamlined body. Like an eel, Eelex runs on volts, in this case flowing electrons to a high-performance Austrian-made Brusa 225 KW/300 horsepower motor. Plugged into three-phase power, dual 60 kWh lithium-ion batteries recharge in five to eight hours. Or with superchargers in just one to two hours. In a pinch, the battery charges in any electrical outlet where you can plug in your cellphone.

A 24-inch Garmin multi-function touchscreen controls nearly everything onboard. Firmware connects via smartphone or Garmin MARQ wristwatch. Remote diagnostics are included. Eelex 8000 stops dead in its tracks within 10 seconds of detecting a watch wearer in the water or more than 10 meters away. Self-docking is one of the tantalizing updates waiting in the wings.

As simple as the sea is salt, the throttle is a rotary knob. As for performance, the top speed is 35 knots. The cruising speed is between 15 and 20 knots. The elapsed time for accelerating from dead in the water to 20 knots is 4.2 seconds. Range, running at 5 to 7 knots, is 100 nautical miles. 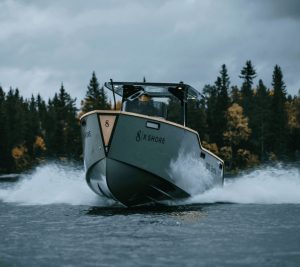