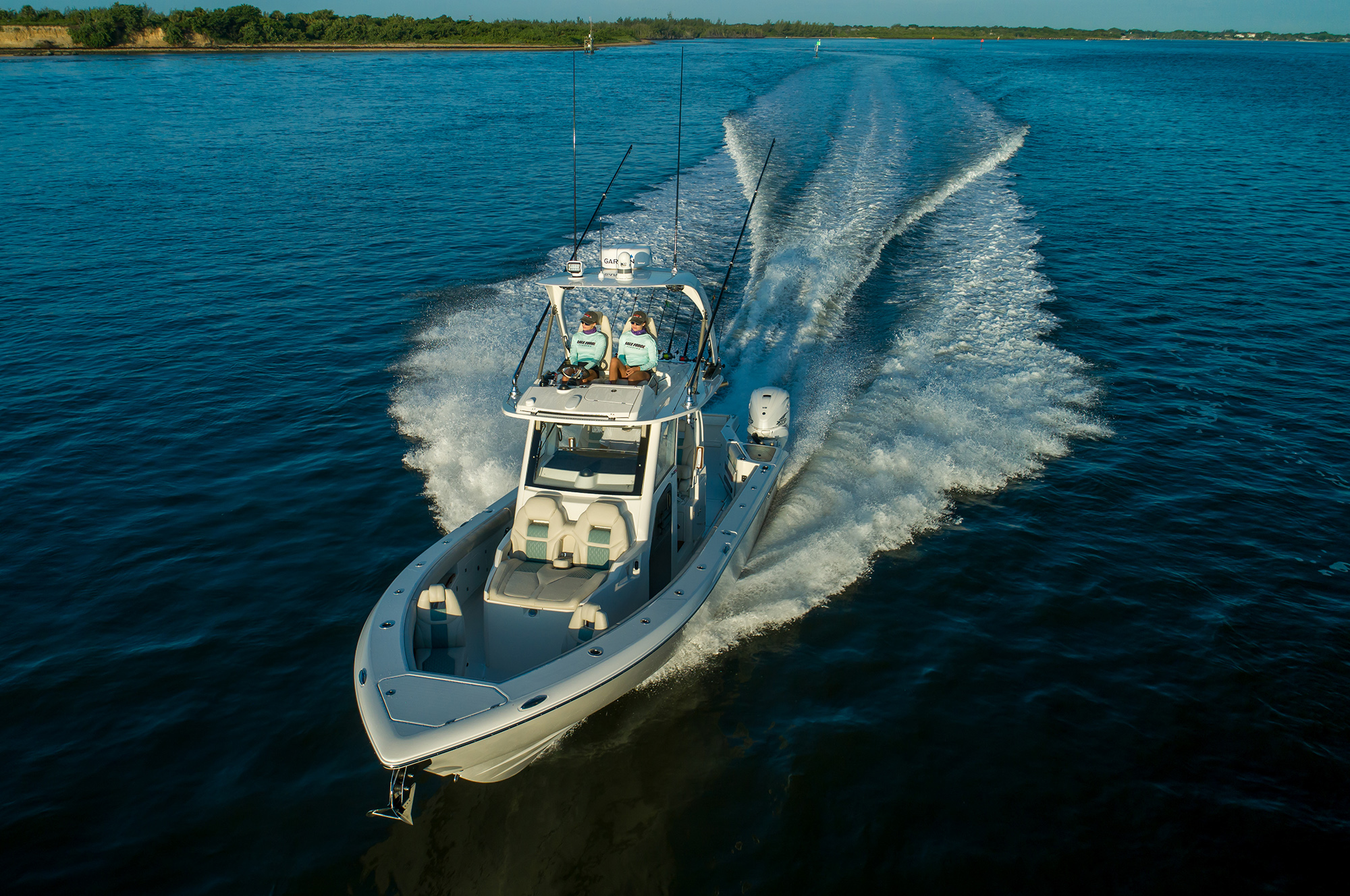 Launching a new boat company can be challenging, especially in a market with so many established center-console boat manufacturers. SOLACE Boats knows the challenges but is confident its new 345 center console will stand out from the crowd.

Founded by Stephen Dougherty, who was an executive with Boston Whaler and co-founded Everglades Boats, SOLACE Boats’ first model has broad appeal to day boaters and anglers alike. What sets the 34-foot boat apart from other center-console boats on the market is the transom that extends aft between the two Yamaha outboards. The unique transom design—dubbed a FishThru transom—allows the boat to run in shallow water.

“We’ve taken and moved the motors outward and we’ve changed the dynamic of what the transom is on a boat,” said John W. Moe, marketing director for SOLACE Boats. “Now we have a center console that has a swim platform and the ability to fish through the motors, not over them.”

Dougherty designed the boat from scratch, drawing on his years of experience in the marine industry. He turned to his in-house engineering team to design and build the parts for the 345. The boat is being manufactured at the company’s facility in Edgewater, Florida.

A unique feature that will appeal to consumers is the workstation behind the leaning post that includes an aft-facing bench seat. The seating for three people retracts into the console when not in use, providing access to the Corian countertop with a dual basin sink that has a faucet and freshwater shower. Below the sink is dual refrigerator and freezer along with three drawers, all finished with stainless-steel faces.

Access to the cabin was easy thanks to a pantograph glass door, which slides open to create an access large enough to fit a surfboard. A window and door provide plenty of natural light to the cabin, which has headroom for a 6-foot-5 person to stand comfortably. Other high-end features include a head with macerator, an illuminated glass sink and air conditioning. The settee converts to a bed that sleeps two people.

For the helm, the builder integrated a hardtop with a windshield that opens hydraulically. The station includes three Billfish series flip-up bolsters and armrests. Electronics include an array of Garmin products consisting of radar, VHF radio and dual 8617 multifunction screens.

Buyers can also opt for a buggy top to operate the boat while fishing. The top station has a steering wheel, joystick piloting and stereo control. When the buggy top isn’t in use, it folds away.

Anglers are in heaven on the 345 as it includes two 45-gallon pressurized live wells and a seachest with dual oversized strainers. SOLACE also included fishboxes to port and starboard. Other fishing goodies are TACO GS 500 HD outriggers, 20-foot carbon-fiber telescoping poles and storage for up to 18 rods.

Moe said the boat’s versality is appealing for buyers, who are looking for it all in their next center-console boat. The boat starts at $650,000 and the price includes a Seakeeper, which Moe said reduces roll by 90 percent.

“You have a boat that is so beautiful and capable at the same time,” Moe said. “You can be fishing offshore on the reef at 6 in the morning, you can be at the sandbar with your family by 10 and you can be to the five-star restaurant in a sport coat in the evening all done on one boat, one trip and you never have to touch land if you don’t want to.”