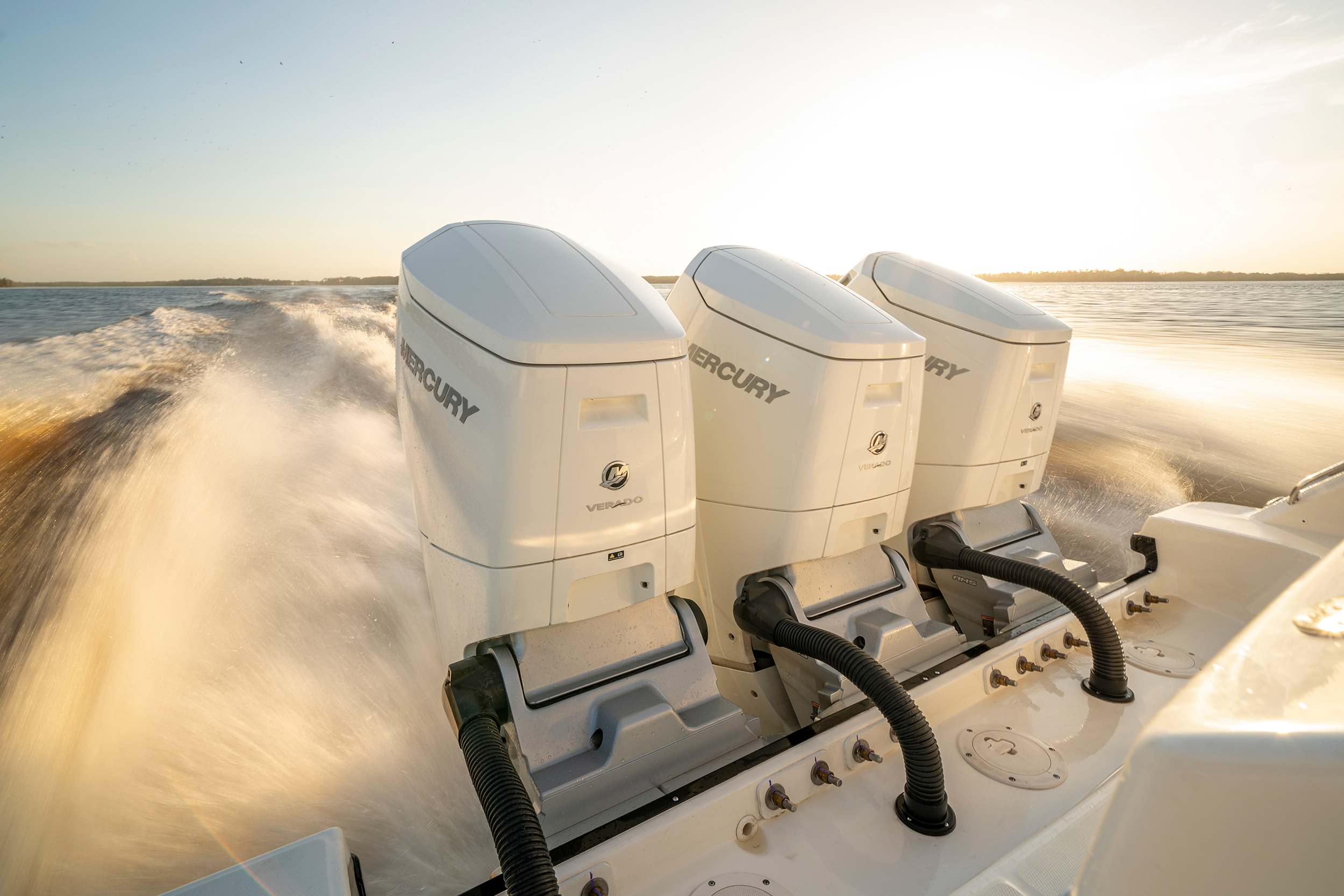 The goal – to make it easier to operate bigger boats…

We knew big power was coming soon – it was just a matter of time and R&D. First it was the 400R outboard which dazzled us all and not far behind it was the 450 which came from the same platform as the 400, and here we are today with this big monster.

Then, of course, Seven Marine, had the 500 plus hp outboard and Volvo Penta behind it – it just had to happen, as Mercury was not sitting back –

We at Center Console Life and Powerboating.com were invited to represent the boating media for this exclusive introduction at Mercury’s Lake X test site in Florida, to witness this big V12 monster outboard, with massive horsepower and torque.

Center Console Life and Poker Runs America’s boat tester, Kenny Howeisner, formerly of Velocity Powerboats, was charged with excitement and adrenaline to test this state-of-the-art ingenuity sitting on the transoms of the test boats, taking up very little more space than the 450s do.

The whole idea obviously is to fit more power into fewer motors to push bigger boats.

Simply put, Mercury just unveiled the world’s largest outboard motor. Not only does the new Verado V12 boast Jovian proportions, with its 600-horsepower rating, it’s also quite powerful. Founded on the existing Verado V8, the V12 stands straight up and down like a tower of power, neatly stacking four new cylinders on top of the block. These narrow-V cylinder banks splay at a 64-degree angle, with the open side of the V pointing aft. Bolted on top, its cylinder heads spin quad camshafts. Verado V12 is naturally aspirated with neither the benefit of a turbocharger, or supercharger. Suffice it to say, sans turbocharger, there is nary the hint of an annoying turbo whine. 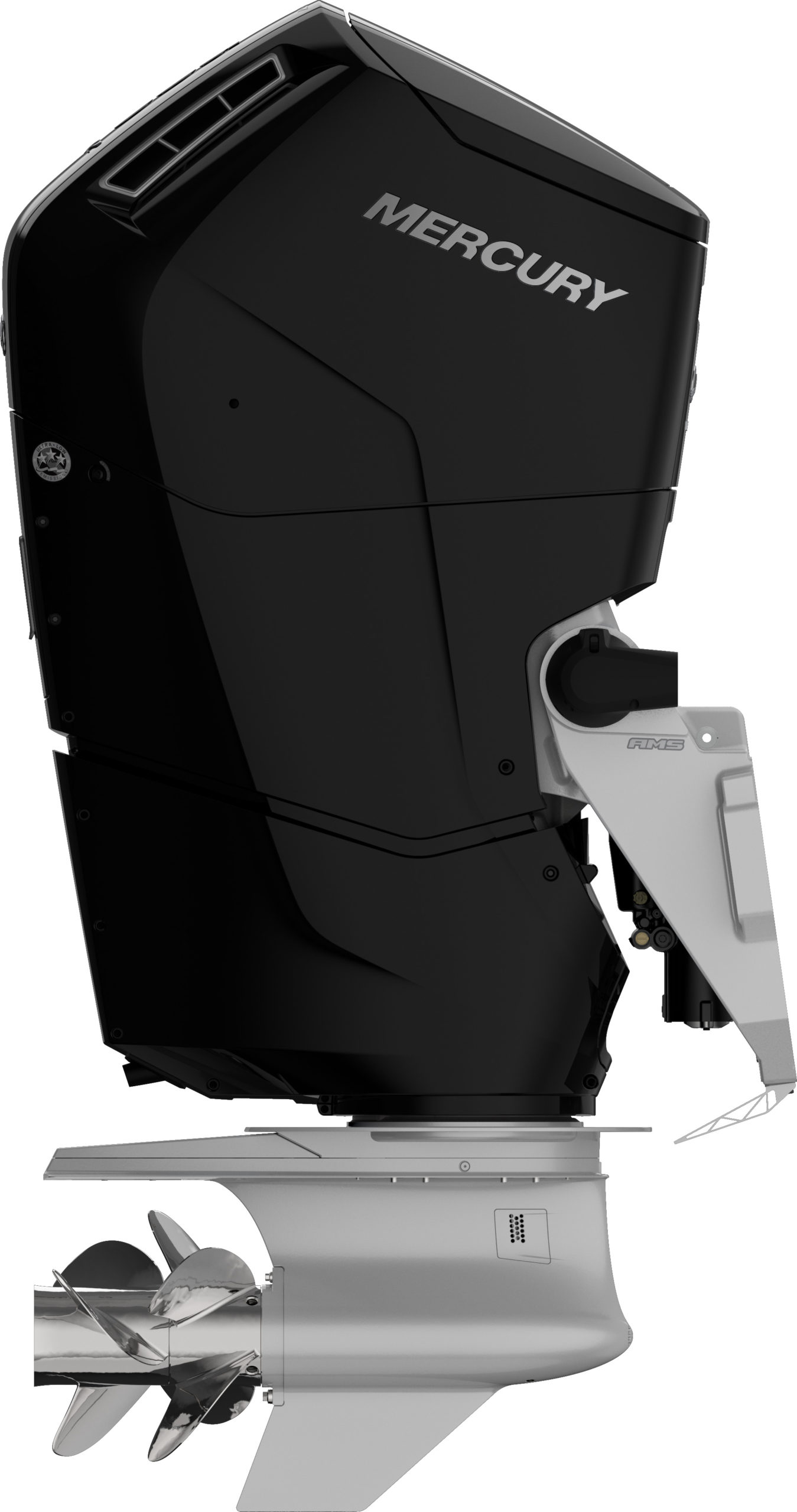 There’s more to this story than just a big block. The Verado V12 torque monster flows raw horsepower from its crankshaft to a two-speed gearbox. Essentially, it’s the world’s first automatic transmission on an outboard motor. Its genesis is interesting for the way Mercury collaborated with German firm ZF Marine to engineer a two-speed automatic transmission replete with a 2.97:1 (low) and 2.5:1 (second) gear sets. At low speed the 20-percent gear reduction leverages engine torque, lifting big boats out of the hole and onto plane before automatically shifting into second. When it shifts, engine rpm drops significantly, lowering fuel consumption and effectively increasing top end. So exactly how fast is fast? The new Formula 50 we tested reached a top speed of 70-mph, while the Valhalla 46 sped a lofty 75 mph. As you’ve no doubt already figured out, these large-displacement V12s are designed to propel boats in the 35’- to 55’- (10.66 m to 16.76 m) range.

Typically, outboard-powered boats adjust course by pivoting the engine (the power head and gear case as one integral unit). Not so with Verado V12. Steering commands from the helm articulate the swiveling gear case, and only the gear case. It traverses from left to right and vice versa, describing a 45-degree arc. Other outboards are limited to a mere 30-degrees of travel. To get a better picture, imagine a gaggle of onlookers at the fuel dock watching a captain walking a boat sideways towards them. They won’t see the V12 Verado move. It just rigidly sits there on the transom while all the work is done out of sight below the waterline.

One after the other, I ran a fleet of Verado V12 rigged boats on Mercury’s clandestine Lake X test site down in Florida. On the very first acceleration run, from dead in the water to wide-open throttle, I could not hear the transmission shift from low into high gear. That wasn’t because engine roar covered it up. It didn’t. Indeed, the engine runs whisper quiet. In fact, Verado V-12 is the quietest outboard over 100-horsepower that I have ever run. I registered 61 dBs at the helm.There’s more to the story. Verado V12 features a dual propeller gear case, meaning dual propellers counter-rotate, spinning two propellers on the same axis. One wheel spins clockwise, while its partner spins counter-clockwise. Props on the Verado come in three- and four-blade configurations, the four facing forward, and the three facing behind. The props come in various diameters and pitches, up to 18 inches. Dual propeller setups are renowned for the way they amplify surface area, paying big dividends in directional control and forward thrust. With this technology, steering response is precise. Similarly, acceleration, mileage and top end all improve. All things considered, one might reasonably infer Mercury’s goal wasn’t maximum performance, but rather to make operating a big boat a lot easier. 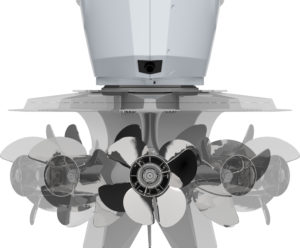 As for the joy of servicing an engine, a flip-up hood located on the top of the cowling allows owners to handily change engine oil and filter at the 200-engine hours mark without the need to remove the cowling or hoist the boat out of the water. That said, the cowling will have to come off for the major service every five-years or 1000-hours.s.

If you’re thinking Verado V12 is a shameless gas guzzler, you would be wrong. A Mercury source asserts that at cruise a pair of Verado V12s get 20-percent better fuel economy than triple Yamaha 425 hp V-8s (1200 versus 1275 hp). At top speed the Verados got 24-percent better fuel economy. Translation, a longer range on a load of fuel.  Also don’t miss the point that hi-octane fuel is not required. This gentle beast burns 87-octane dock gas.

Finally, remember in the beginning when we noted how Verado V12 is naturally aspirated? If past is prologue, expect a supercharged version of Verado V12 from Mercury Racing in the not too distant future. I predict a 750-horsepower rating.