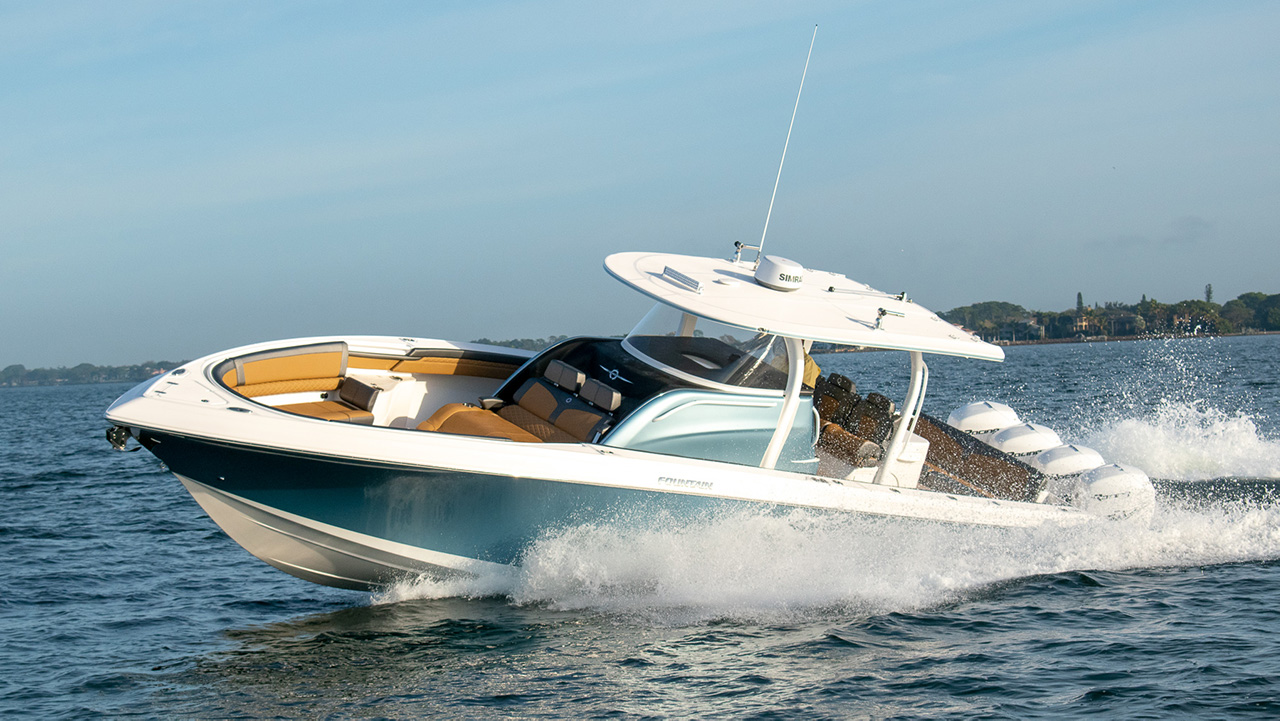 Fountain Powerboats has been building center-console boats long before other high-performance builders jumped into the market. With Fountain’s pursuits in offshore racing and kilo records, it’s easy to overlook the company has had serious center-console offerings for almost three decades.

Fountain Powerboats’ latest offering, the 43 NX, builds on the center-console heritage by offering a model that appeals to both fishermen and performance-boaters alike. The model is the second in the NX series, which also includes a 39-footer that was released early last year.

Nearly two years in the making, the 43 NX is a quad engine, wide beam boat for the upscale performance center-console market.

“We wanted something that was going to be comfortable with quads, not stretched to be a quad,” said Joe Curran, chief operating officer for Iconic Marine Group, which owns Fountain Powerboats. “With engines getting bigger and more powerful as time goes on … it’s only going to get better.”

When Fountain Powerboats set out to design the 43 NX, they wanted to create a center-console model that differentiated from the company’s Bluewater line of fishboats. Curran said the 43-footer will likely be the largest boat in the NX Series but the company plans to introduce more models.

“The NX series, as a whole, was brought out for that buyer who wants the performance, handling and durability of a center console but not necessarily to go fishing with it,” said Martin Rusin, marketing director for Iconic Marine Group. “We’ve seen that transition in the last several years where more and more people are getting out of even cruisers and going into the larger center-console market.”

Checking in at 43’ long and 12’3” wide, the 43 NX is built for boating offshore and large lakes. It’s also designed to bring along a lot of friends and family for a day on the water. Standard seating includes U-shape bow seating and a chaise lounge in front of the driver’s helm. There’s also a large bench seat on the transom.

The best seat in the house is the triple-wide helm seat with flip-up bolster. By our count, you can seat 12 comfortably. Designers knew the cockpit had to be inviting, so it went with a similar layout to the sister boat the 39 NX.

“It’s all about luxury, it’s all about great groups of people, poker runs, running around South Florida,” Rusin said. “It’s really a great boat for that.”

The helm spot comes standard with triple Simrad 16” NSS EVO3 displays set into a carbon panel with LED push-button switches. A host of other electronics include Mercury Marine’s VesselView, Chirp Technology with autopilot and radar.

Just in front of the pilot’s helm is a surprisingly large cabin, which is accessed through a sliding starboard door. Inside the cabin, Fountain included sleeping accommodations for two, a separate head and shower and a vanity with a sink.

While the 43NX comes with a cabin, Rusin said today’s buyers don’t see the cabin as a priority.

“People don’t necessarily sleep on their boats anymore. We’re seeing that trend leave the industry,” Rusin said. “They like the utility and durability of a center console, the overall layout, the amount of space that you get, how many people you can take on board, how much open room there is, storage, every aspect of it.”

Buyers can customize the area behind the helm seats but we suspect they’ll go with the standard setup of a wet bar with a galley sink, stove and refrigerators. Rusin said buyers can opt for a tackle station or pressurized live wells.

The solid hardtop fits seamlessly into the helm station with rod holders sculpted into the white powder-coated frame. Fishermen will also love the rod holders in the gunwales and three fish boxes with overboard discharge.

Access to the cockpit was simple thanks to a dive door to starboard. An integrated ladder, which can be tucked away, provided easy access in and out of the water. Fountain provided a freshwater washdown, which has a 64-gallon holding tank.

Base power for the 43 NX are Mercury Verado 350 outboards. If buyers want a little more power, Fountain Powerboats offers the boat with quad Mercury Verado 400 outboards. The 500-gallon fuel tank allows for plenty of cruising range.

Curran said the 43 NX will have the same hull and build process as the 39 NX. The hull, deck and stringer system is fully infused, reducing weight without compromising strength. The boat is being built out of the company’s plant in Washington, North Carolina.

“We’re one of the fastest growing in that market segment as far as the 33- to 45-foot center consoles,” Rusin said. “We’re having a blast and you can look forward to seeing even more new product from us.”