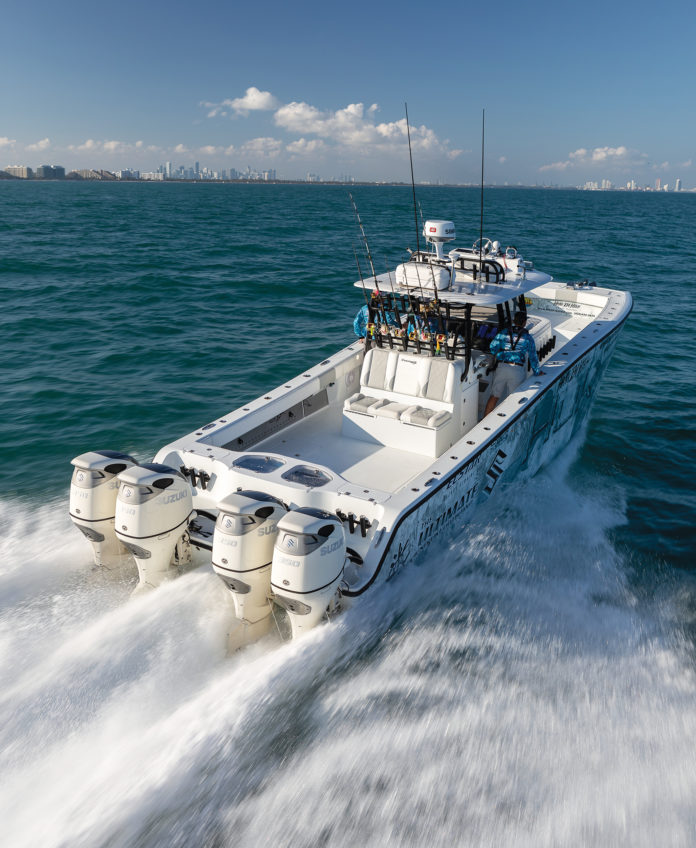 In our annual marine power feature we undertake a comprehensive review of what’s on the market to power your center console. We shine the spotlight on the line from every major outboard engine manufacturer, and look at what’s new for the coming season, what engines got retired, and what tried-and-true models are still in the lineup. The focus is on assisting you to choose the engine that’s right for your new boat purchase, or for your repowering needs.

Sky is the limit when it comes to horsepower and Mercury continues to push it after introducing a Verado 400 hp outboard at the 2019 Miami International Boat Show, its sister company Mercury Racing released its monster 450R Verado over the summer.

Talk about back to back wins! Within the Mercury outboard lineup there are four model lines: Verado, Pro XS, FourStroke, and SeaPro.

Since their introduction, the four-stroke Verado line of outboards has been a huge hit with both boatbuilders and consumers alike. In February 2018, Mercury took this already successful line over the top with a complete overhaul. In 2019 there were just three engines in the Verado line: a Verado 350 that was originally introduced in 2015 and is the lightest 350 hp outboard on the market by 95 pounds; and a 250 hp and 300 hp that are based on the 4.6L 64 degree V-8 engine with Dual Overhead Cam and 32-valves. The 158.5 CID/2.6L inline 6-cylinder 400 hp Verado is the lightest outboard in the 400-plus horsepower category by nearly 300 pounds.

Completing Mercury’s four-stroke outboard line are an additional 20-plus engines from 2.5 hp up to now 300 hp–with the introduction in 2018 of the 250- and 300-hp FourStroke based on the new 4.6L engine. The game-changing 150 hp inline four-cylinder still reigns as the lightest 150 hp outboard on the market–and Mercury claims it’s also the easiest to service.

The original Evinrude’s E-TEC two-stroke direct-injection engine dates back to 2003. In general, two-stokes are lighter and have fewer parts compared to an average four-stroke engine. In 2014, the design team started with an entirely clean sheet of paper with a single mandate: to design a truly all-new engine block on which to base their new outboards – the E-TEC G2.

Rather than taking a traditional engine block that was originally designed for a carbureted flow of fuel and adapting it to perform with a direct-injection fuel delivery model, the new G2 block was designed from the get-go to be a direct-injection engine. The end result is an outboard with 20 percent more torque, 75 percent lower emissions, and 15 percent better fuel economy–not to mention the longest operating time before a required scheduled maintenance period. Plus, it’s available in over 400 custom color combinations as well.

Many of the original E-TEC series outboards are still available. These 14 tried and true workhorses remain unchanged but max out at 150 hp, leaving the higher horsepower range to the new G2 engines. There are five High Output (HO) engine in the E-TEC lineup from the 15 hp HO to the 135 hp HO. There are two V6 engines from 115 to 150 hp that feature a unique mix of the largest displacement in their class and the lowest weight. The two V4’s (90 H.O. and 115 hp) engines weigh in at just 390 pounds.

There are nine E-TEC two-stroke outboards inline models from 15 to 90 hp. In this same power range, Evinrude also offers a 30 hp and a 55 hp MFE—multifuel engine.

The mid-power line consists of eight outboards from a 30 hp model to the new F90B – featuring a single overhead camshaft and four valves per cylinder that is 13 pounds lighter than the original F90 that is now retired from the lineup.

The high-power line now consists of seven outboards from the F150 to the new upgraded F350C that debuted in 2016. The F175’s in-line four-cylinder 2785cc (170.0 CID) fuel-injected engine is matched with a 50 amp alternator. The 200 hp model is still the lightest on the market at just 487 pounds.
The all-new XTO line features just one engine currently – the XF425 hp XTO offshore engine features a 32-valve V8 Four Stroke DOHC design with 5.6 L of displacement, a 90 amp alternator and it runs on regular 87-octane fuel.

Founded a decade ago, Seven Marine is a team of hand-picked marine engineers and technicians, based in Milwaukee, Wisconsin, who are proven innovators with decades of experience. The company is focused only on making the most powerful and technologically advanced, highest-performing outboard motors on the planet.

In July 2017, Volvo-Penta became a majority owner of Seven Marine, which still operates as a separate company. The common thread between Volvo and Seven Marine is the automotive based platform that Volvo’s sterndrives and Seven Marine’s outboards are based on.

We predicted an expansion/enhancement of the Seven Marine product line as a result of the Volvo investment. That’s just what happened. At the 2018 Miami International Boat Show, the company introduced two brand new models: the 527 and the 577.

Seven Marine currently offers three outboards model. 527, 577s and a 627sv. (Their original outboard introduced seven years ago now – the 557 hp – is being phased out and replaced by the new models.) The 527 and 577s are both based on Seven Marine’s proven 6.2L supercharged V8 platform with closed cooling, wet-disc clutch transmission and fuel injection. The new 527 is an attainably priced high-horsepower outboard. The 577s is a luxury higher-horsepower outboard with full spectrum LED lighting in the cowl,

The 627 is a truly ultra-luxury outboard designed to move those who move the world. At its core is a 376 CID horizontal 90 degree V8 four-stroke engine block that produces 627 hp at 5,600 rpm – and it runs on regular 87-octane fuel.

Their new contra-rotating CR gearcase is offered on all three outboards. It supports the largest blade area in the industry, ranging from 18 to 19.5 inches, with four- or five-blade prop options.

Suzuki’s marine division now offers four-stroke outboards from 2.5 hp to 350 hp. The midrange line has 14 different models from the 3-cylinder 40 hp to the 4-cylinder 200 hp all of which feature the company’s Lean Burn Fuel System that uses up to 14 percent less fuel in the midrange speeds where outboards spend most of their running time compared to the original engine models.

Finally, the high-power line has five models based on the 55 degree V6 block with power outputs from 225 hp to 350 hp. Their newest engine—the 350 hp outboard—began with a blank sheet of paper and features 4.4L of displacement, a DOHC 24 valve design with Multi Point Sequential Electronic Fuel Dual Injection with Lean Burn and Oxygen Sensor, a final gear ratio of 2.29:1 and a pair of counter rotating props. The design features two smaller gears, in a smaller gearcase, as opposed to one large gear for a single prop, resulting in better hydrodynamics. It’s available in counter-rotation for dual engine installations.

While the standard color for Suzuki engines is black, their SS line comes in a matte black finish with red accents, and cool white is also available upon request for many engines. Suzuki offers a 3+3 Suzuki Protection Plan for a six-year warranty on all models.

Honda Marine manufactures four-stroke outboard engines from 2.3 hp to 250 hp. The Honda midrange line consists of eight models from 25 hp to 90 hp. The large outboard line features six models from 115 hp (the largest displacement outboard in its class at 2,354 cc/144 cubic inch) up to the flagship of the Honda outboard fleet: the BF250 – introduced in 2011. The 250 hp 3.6L 24-valve, 60-degree V6 outboard is based on the Honda Odyssey minivan engine and claims to have the best-in-class fuel economy. That, along with a host of other innovations and advancements, went on to help the BF250 win an IBEX Innovation award that year.

Tohatsu is Japan’s oldest outboard manufacturer, and has been producing high quality, durable outboard motors since 1956. Tohatsu America Corp. is the U.S. distributor of Tohatsu Outboards.

There are five larger high-power engines from the in-line 4 cylinder DOHC 16 valve 115 hp model, to a 250 hp 3.5L narrow design V6 that features a 90-amp alternator and an industry first: separate dual air circuits so cooler denser air is delivered to the intake.

All Tohatsu outboard engines meet or exceed the U.S. EPA emission regulations and have earned the California Air Resource Board (CARB) 3-star Ultra-Low emission rating, and come with a five-year limited warranty.

Cox Powertrain unveiled the world’s first 300 hp diesel outbound engine at the 2018 Fort Lauderdale International Boat Show. This revolutionary diesel engine, the Cox CXO300 is the world’s highest power density diesel outboard engine. It was specially developed to rival the power, performance and weight of a gasoline outboard, with the additional benefit of diesel economy. In line with NATO’s single-fuel policy, a policy which aims to cut the use of gasoline-driven equipment in favor of diesel and will be of particular interest to commercial and professional boat operators, as well as the recreational boater.
The engine is based on the proven technology of a 4-stroke, V8 architecture, and features a 266 CID (4.4L) displacement that creates 479 foot-pounds of torque and delivers 300 hp at the prop shaft, while weighing just 826 pounds. In comparison, that’s 100 percent higher peak torque at the crankshaft than the leading gasoline 300-hp outboards and is 60 percent higher compared to a leading 350 hp. It offers at least 25 percent improved range compared to a gasoline outboard, longer service intervals of approximately 1,200 hours, and is designed to have up to a three times longer lifespan.

Back in 1934, the inventor of the electric trolling motor, Mr. O. G. Schmidt, named his company after his town and state. Celebrating over 80 years in business, Minn Kota is a division of Johnson Outdoors, and offers a plethora of both freshwater and saltwater trolling motors, in 12-, 24- and 36-volt versions, that mount off the bow or the stern, plus an all-new 2hp electric outboard.

The freshwater line consists of nine bow-mounted models, and four stern-mounted models in either electric steer or cable steer versions.

Their unique “engine mount” line of trolling motors from 55 to 160 pounds thrust install directly onto your outboard’s cavitation plate.

Their single e-drive 48-volt electric outboard, can run for 2 hours at full speed (5 mph) on a single charge.

Options include cable steering, electric steering or hand steering. Or add their i-Pilot Link that uses GPS technology and ethernet connectivity to allow some Minn Kota motors, Humminbird fishfinders, and LakeMaster digital GPS maps to communicate with each other.

MotorGuide has been well known for their electric trolling motors since the 1960s when their “Guide-Rite” model was the first to patent the use of a rack-and-pinion steering system that made the directional control of the motor more sensitive and reliable.

The freshwater models range from 30 to 109 pounds of thrust, each with hand, foot or wireless controls and three blade Machete III props designed by Mercury Propellers.

MotorGuide invented the saltwater tolling motor category and today their saltwater series includes six models in 12-, 24-, or 36-volt power options, with thrust ratings from 45 to 105 pounds.