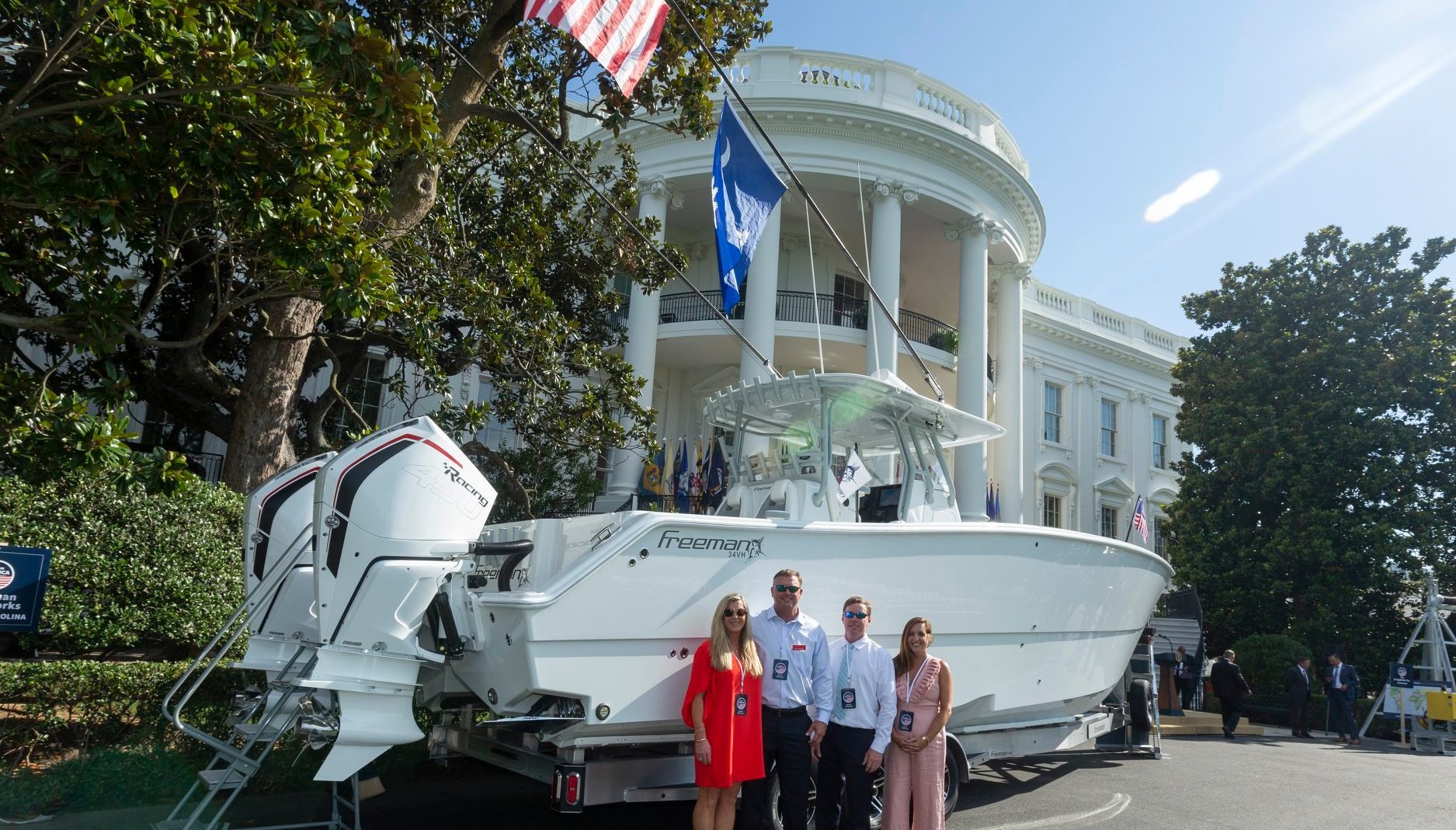 President Donald Trump boarded a Freeman Boatworks center-console boat that was displayed on the South Lawn of the White House July 15 as part of a “Made in America” showcase.

The third annual showcase at the White House highlights products that were built in America from all 50 states. Freeman Boatworks, based in Summerville, South Carolina, was selected to represent the state of South Carolina.

Scott Cothran, who leads marketing and sales for Freeman Boatworks, said they received a call from the White House on June 12 to see if they would like to participate. The caveat was that the products on the 34-foot boat had to be built in the U.S.

“One of the guys that took the call came knocking on my office door and said, ‘Hey you are going to want to take this, it’s the White House,’” Cothran said. “I guess like most that get a phone call from the White House, you think uh-oh, what did we do wrong?”

Cothran originally wanted to showcase the company’s 42LR with quad Mercury Racing 450R outboards but the model’s 11’9” beam was too wide to get through the gates to the White House. They opted for the 34VH with Mercury outboards and its 10’10” beam but had just 2 inches to spare getting the V-bottom past the gate.

Secret Service screened the boat at an offsite location, Cothran said, and then they were given a police escort to the White House where the boat was moved to the South Lawn. Cothran said they pulled everything from the boat for the security inspection.

“They were very professional and courteous but very deliberate,” he said. “It will go this way, you will do what we say.”

Once on the South Lawn, they showed the center-console model to a couple of cabinet members before President Trump made an appearance at the event. Cothran said he invited President Trump on the boat and he stood on the swim platform surveying the boat and asking questions.

Since the event on Monday, Cothran said they’ve heard some criticism from people. It wasn’t unexpected considering how polarized the country has become.

“We were honored to be showcased by the President of the United States,” he said. “Politics aside, I don’t care who the president is. If you get invited to represent your product at the White House, you go.”

Cothran bristles at the criticism but said the attention raised awareness about the brand founded by Billy Freeman.

“We had an opportunity to go to the leader of the free world front’s yard and park a boat there,” he said. “Wholly cow, what a great opportunity it was.”

Cothran said they were representing the company’s 100-plus employees and the whole marine industry.

“We felt like we were representing obviously not only our company but the entire marine industry,” he said. “Any exposure we can give the industry helps us.”