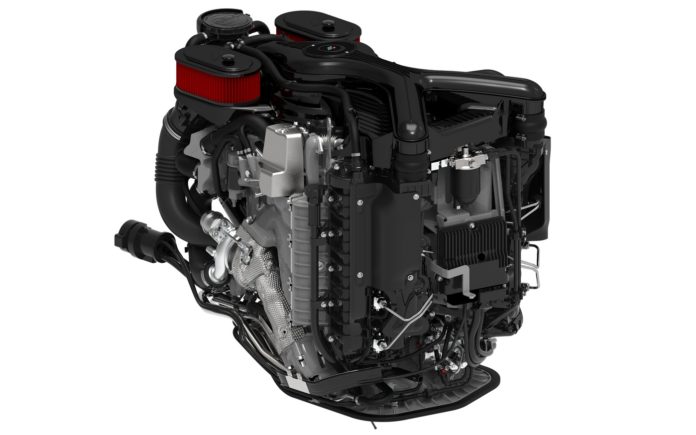 Nearly a year after announcing its new diesel outboard at the Fort Lauderdale International Boat Show, Cox Powertrain will start production on the CXO300 in October.

The British company expects the first round of deliveries for the outboard to take place by the end of the year, officials announced this week at the Seawork International marine and workboat exhibition in Southampton, U.K.

The highly anticipated diesel outboard will be built at Cox Powertrain’s production facility in Shoreham, England. When fully operational, the production line will run two shifts per day to meet demand.

“This is a very exciting time for everyone at Cox Powertrain,” said Cox Powertrain’s Operations Director Jerry Attridge in a press release. “Not only is the CXO300 a superb, innovative product, we are also creating a complex, high-precision manufacturing facility using cutting edge technology to deliver what can only be described as a game-changing product into the marine outboard market. Thankfully, we have built a fantastic team of people that I am certain will deliver a transformational product.”

The outboard is a 4.4-liter V8 block that uses a high-pressure common rail fuel injection and twin turbochargers to produce 338 horsepower at the crankshaft and 300 horsepower at the prop. The CXO300 produces 479 foot-pounds at peak torque.

Although Cox Powertrain hasn’t released a final price for the CXO300, it’s expected to retail for $50,000. The company touts the CXO300 has lower fuel costs, less maintenance and three times the lifespan of a gasoline-powered outboard. Company officials see government agencies as the primary buyer but believe there is strong potential for the recreational marine market.

Among the advanced technology includes an assembly line will include numerous features such as a camera system to verify the continuity and exact size of each bead of sealant laid down by the bespoke plotter to ensure the perfect seal. The Wi-Fi-enabled DC tooling will communicate directly with the MES system to record all assembly torque data; an automated ‘Spin rig’ to test every gearbox and a comprehensive end of line ‘Hot test’ facility to ensure each powerhead achieves the exacting standards, officials said.

The CXO300 weights 826 pounds dry, which is about 200 pounds heavier than the 300-horsepower gasoline counterpart. As production ramps up, Cox Powertrain expects to find some additional weight savings.