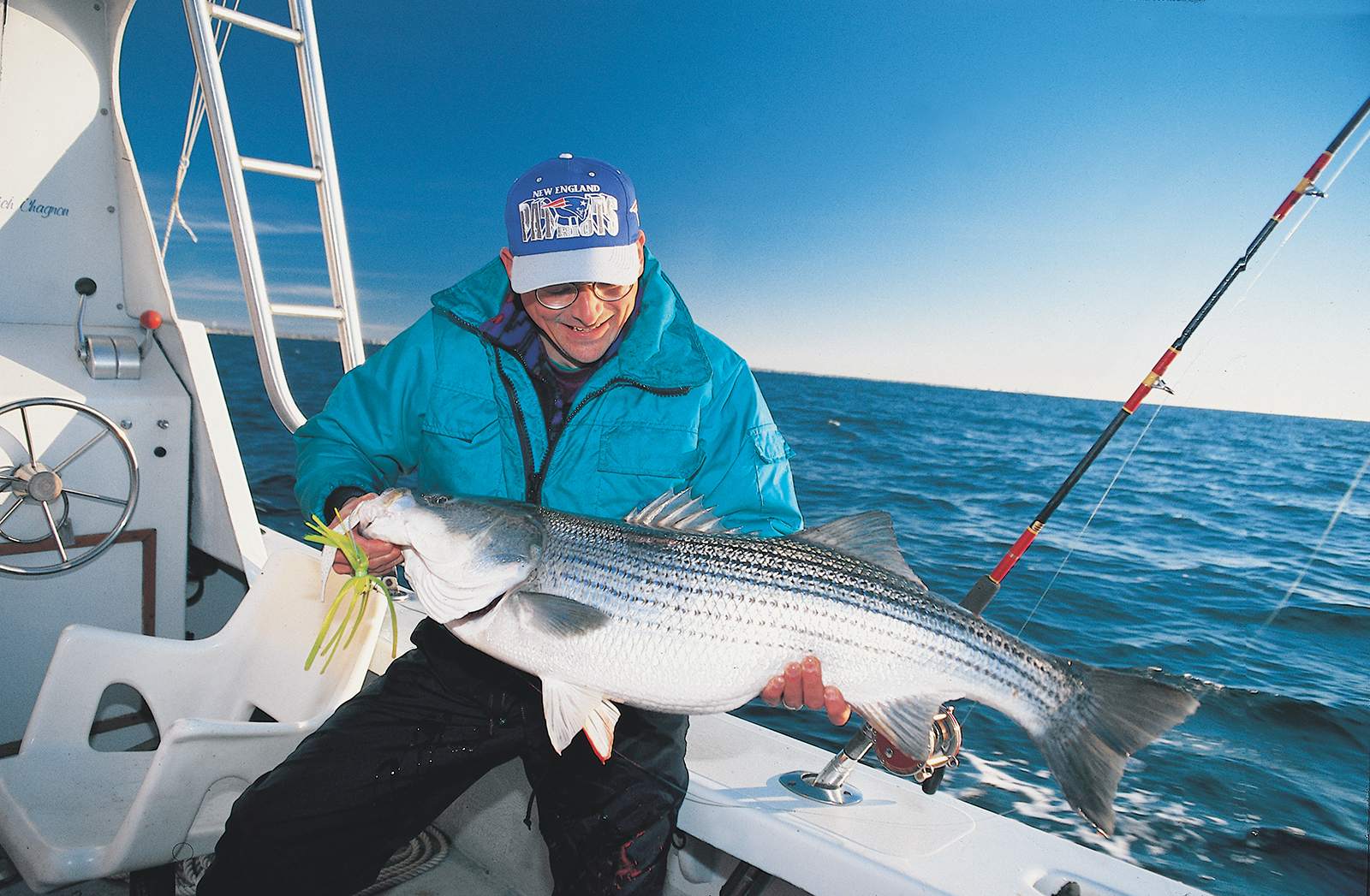 Day in and day out, all season long, trolling lures on wire line is one of the best ways to locate and catch trophy striped bass and bluefish. Here’s what you need to get started.

Mike Laptew knows better than most that the biggest striped bass usually hold deep, well below their smaller schoolmates. An underwater videographer and former breath-hold spearfisherman, Laptew has logged countless hours below the surface and observed thousands upon thousands of striped bass in their natural habitat. Watch one of his many fine videos and you’ll see for yourself how the biggest stripers always hold nearest the bottom, underneath the rest of the school. The same holds true for bluefish, with the largest choppers swimming below and behind the wolf pack.

“I wish I could tell you exactly why game fish, particularly stripers, establish a pecking order where the biggest fish are almost always right on the very bottom,” says Laptew. “As best I can determine, it’s because they don’t want to expend the energy it would take to compete with their smaller, more aggressive schoolmates. Perhaps the bigger fish simply prefer to root on the bottom for lobsters, crabs, flounder, scup and other forage. And when bluefish are slashing through menhaden overhead, the biggest bass are mopping up the chunks that drop to the bottom. You want big bass? Think deep!”

Laptew’s underwater footage serves as visual proof of what top fishermen have long known — to catch the biggest bass and blues, you’ve got to go deep, especially if you want to score during the bright mid-day hours when most inshore game fish chill out near the bottom. One of the best methods of presenting a lure to low-lying lunkers is the time-honored technique of trolling with wire line. Not only is trolling wire a great way of getting a lure into the pay-off zone, it also lets you cover a lot of territory, which is helpful for locating fish.

Getting deep and covering ground are two critical elements of fishing rips, those legendary producers of trophy bass and blues. Rips are formed when current flows over uneven bottom, creating a zone of fast, turbulent water that places baitfish at a disadvantage over bigger, stronger predators. Stripers and bluefish line up along the rip line, often hugging the bottom to escape the strongest flow and waiting to pick off an easy meal drifting past overhead.

So, what exactly is a rip, and how do you find and fish one? Rips can be formed by sandy shoals, rocky reefs, wrecks and individual boulders — anything that changes the contour of the surrounding bottom. Some rips are marked by a faint line of riffled water, while others feature an imposing wall of tall, standing waves that require constant vigilance on the part of the skipper.

If you don’t know the location of a productive rip in your area, consult a chart. Look for spots where the water depth rises abruptly from 30 to 40 feet to within 15 feet of the surface. These are prime spots to fish wire. As long as there is good current flowing over the depth change, you can bet that stripers and blues will gather there.

Rip-line fishing is a two-man game, especially for the novice. You should have someone controlling the boat and watching the depth sounder while a second crewman tends the rod. Once you get good at wire-line trolling, you can fish single-handed, but it’s a tricky proposition for even the best angler, especially on a big rip. And although it’s possible to fish two wire-line outfits at a time, it’s a good idea to start out with just one, as trying to untangle 150 feet of wire line is not much fun.

To fish a rip with wire, proper boat handling is paramount. The first step is to determine the up-current side of the rip, as this is the side you will want to keep the boat on. It is indicated by an area of fast, calm water that terminates in a distinct line of choppy water — the rip line — which continues for some distance behind the rip.

The next step is to observe the boat traffic. Note that some of the more popular rips can be quite crowded, especially during peak season, and the regulars take a dim view of newcomers who don’t practice the proper etiquette. If you’re unfamiliar with rip fishing, it’s probably a good idea to find a quieter place to practice your skills. At the very least, watch the other boats and see how they are working the rip, then join the conga line of trollers as seamlessly as possible. If the other anglers are using a different technique, such as drifting natural baits or fly fishing, pick another spot to troll.

As you approach the rip, the angler should stand ready in the cockpit, having let out the proper amount of line in accordance with the water depth and strength of the current. In a moderate current, figure on roughly one foot of depth for every 10 feet of wire. For example, letting out 150 feet of wire will get the average lure down about 15 feet in a moderate current. Remember, you want the lure to swim just above the bottom. If it’s too high, the fish won’t waste their energy pursuing it. The easiest way to determine how much line to let out is to free-spool line gradually until you feel the lure tap bottom, then reel in three to five turns. This works well in sandy rips, but could cause problems over rocky or vegetation-strewn bottom.

With the angler ready to go, approach the rip slowly. Here’s where boat-handling becomes very important. The goal is to keep the boat on the up-current side of the rip by using the engine or engines to stem the tide. This requires a subtle hand on the throttle and wheel to keep the boat in position and the lure working in the most productive part of the rip line. Meanwhile, the angler should work the rod to give the lure action and tend the line, reeling in as the water gets shallower and letting out as it gets deeper. This requires constant communication between the angler and the skipper, who should keep one eye on the depth sounder to monitor the changing bottom.

Once you get the feel of stemming the tide, you’ll be able to “crab” the boat parallel to the rip line by slightly turning the wheel and adjusting the throttle. This allows you to fish different parts of the rip. Again, the goal is to keep the boat ahead of the rip so that the lures are worked through the strike zone, which is normally just ahead of or right in the most turbulent part of the rip. By “jockeying” the throttle forward and back, you can use the boat to work different parts of the rip.

When you hook a fish, immediately mark the spot on your GPS and turn the bow up-current. Keep the boat in position as the angler fights the fish. If the current makes it too difficult to bring in the fish, back off the throttle and drift through the rip, but only if it’s safe to do so. If you try this technique, be sure to have the angler keep a tight line on the fish at all times or the hook may drop out. Once you’re on the other side of the rip, it should be easy to bring in the fish. In a large rip where it’s unsafe to drift through the rip, you may need to use the boat’s power to help pull the fish out of the rip line and into slower, calmer water. Be sure to do this slowly or you may pull the hook free.

Once the fish has been landed, return to the same part of the rip, as it’s likely to hold more fish. If you come up empty, resume your search by trolling along the rip. Always fish parts of the rip that hold a concentration of bait. If there’s bait, game fish will follow. And if you see birds wheeling and diving over a particular section of the rip, get there fast!

You can fish almost any kind of lure on wire, but the most productive types depend on what the fish are feeding on, which often depends on the environment. Here are some general guidelines when it comes to lure selection, but the most important thing to remember, no matter what lure you choose, is to fish it low and slow. If you’re not hitting bottom from time to time, you’re not getting deep enough.

Parachute jigs are perhaps the most commonly used wire-line lures. They work very well in areas of sandy bottom, especially when large baits such as squid, herring or mackerel are present. Parachutes feature a heavy lead head, a reversed skirt that pulsates when jigged through the water, and come in two, four or six ounce sizes. Be sure to try different colors and sizes, and always dress your jigs with a long strip of pork rind. Parachutes are usually fished on short rods, with the angler making the jig dart through the water in short bursts. This is typically done by holding the rod upside down, tip pointed at the water, and making short, sharp sweeps — like using a broom.

Multi-lure umbrella rigs work extremely well when large schools or sand eels, spearing or peanut bunker (juvenile menhaden) are on the menu. Umbrellas are typically rigged with small tube lures, metal spoons or soft-plastic shad bodies, depending on the prevailing forage. Attaching an oversized swimming plug to the center of the umbrella rig, so that it tracks behind the school of smaller baits, can produce strikes by inciting the competitive feeding instincts of large fish.

Long tube lures are another top producer among wire-line trollers, and are usually fished over rocky bottom or wrecks, where eels and worms are common prey items. Savvy tube trollers always place one or two sea worms on the rear hook of their tubes to add scent and taste to the equation. In fact, some anglers feel that the tube is merely a means of presenting a largely weightless worm to the fish.

Bunker spoons, those shoe-sized slabs of metal that sport a keel weight, work well when adult menhaden and herring are prevalent. The key to fishing these lures is to troll them as slowly as you can, so the spoon wobbles and flashes like an injured baitfish. Some anglers use special extra-long rods for trolling bunker spoons on wire. These eight-foot sticks feature a slow, parabolic action, and are generally left in the gunwale holders while trolling.

No matter what kind of lure you choose to pull on wire, just make sure you let out enough line and troll it slow enough to get it near the bottom. Think low and slow and your chances of hooking a trophy will improve dramatically.

Is Ultralight Right in Salt?

Center Console Life
Boating is about being social and spending time on the water with family and friends. Few boats deliver the social aspect as...

Center Console Life
The ingenious Seakeeper uses a gyro stabilizer to reduce boat roll by up to 95 percent.  By Gregg...

Center Console Life
Launching a new boat company can be challenging, especially in a market with so many established center-console boat manufacturers. SOLACE Boats knows...

Center Console Life
Looking to fill a niche in its product line, Grady-White Boats has introduced the Canyon 326 that combines fishability and comforts for...

Gregg Mansfield
Sportsman Boats is debuting this month the all-new Open 352 Center Console, an innovative boat the South Carolina boatbuilder is touting as its new...