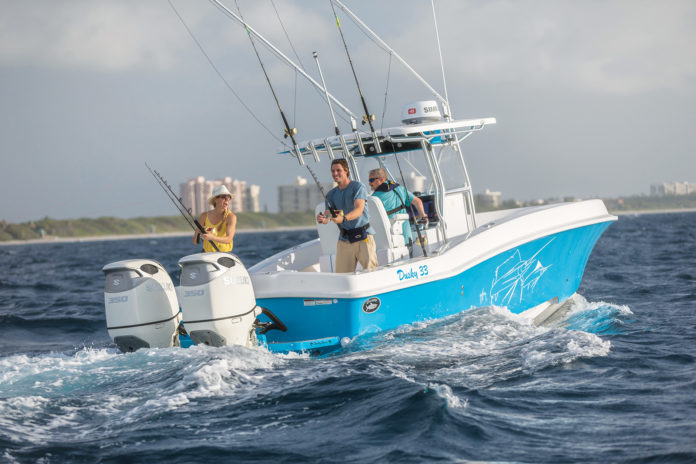 In an explosive burst, line is flying off the reel hard and fast. The reel itself is screaming for mercy, the rod is stressed to breaking and then boom! A meat rocket, the kind you only dreamed you might one day pull over the transom, has taken the bite, broken the surface and is now headed skyward. Welcome to king fishing.

King mackerel. Kingfish. Smoker kings. The Enigmatic Pelagic. Half predictable migratory species and half unknowable quarry. These beasts make for some of the best saltwater fishing.

Along the Gulf and Atlantic coasts Kings run twice every year. South in the fall and north in the spring. Opportunities to do battle with these savvy fellows exist from the Texas/Mexico border, around the tip of Florida and the entire eastern seaboard. These mass migrations make for great biannual recreational fishing opportunities on both the Gulf and Atlantic coasts. Over the years a number of fishing tournaments have developed in conjunction with the migration of these king mackerel.

Old Salt King of the Beach

Old Salt Fishing Foundation, located in sunny Madeira Beach, Florida, runs the two largest King Mackerel fishing tournaments in the United States. Each tournament hosts 600 to 700 teams, all vying to be the KING. The King of the Beach Kingfish Tournament (they have a spring and a fall edition) offers the perfect tournament opportunity for not only seasoned competitive teams but for first time and single-engine entrants as well.

The King of the Beach boasts a guaranteed first-place payout of $60,000 for the heaviest king mackerel weighed and for 62 other teams a shot at their share of the total tournament payout of $225,000.

Rich as the tournament is, it’s not all about the Benjamins. During the KING Old Salt hosts 700 kids and their families for a free Kids Fishing Slam on the second day of the event. Kids fish and compete for awards all made possible by Old Salt, a slew of great volunteers and sponsors. The KING is a full three-day waterfront festival for the anglers, kids and families, and the entire local community with live music, food, drink and vendors.

The idea of entering a fishing tournament that attracts as many as 700 teams from across the southeast United States and beyond might seem a little daunting for first timers and anglers fishing out of boats powered by a single outboard engine.

For teams fishing on smaller vessels (those with one engine) Old Salt has initiated a set of boundaries that all competitors are able to achieve. No shotgun start (you leave from the dock/ramp like civilized folk) and a local fishing environment that provides legitimate opportunities inshore, nearshore and offshore. Couple these conditions with a low entry fee of $225 per team and the high payouts, there are few reasons not to participate. If you can get on the water, you can compete in the King of the Beach.

Competing in the 2019 Spring King, Hirsh acknowledged some trepidation. That quickly disappeared at the captain’s meeting. Dozens of repeat competitors were more than happy to share their experiences in making the Hirsh’s family first KING a safe and successful one.

Michael and Team Lured weighed in the Spanish Mackerel Division taking third place and a $750 payout. Not bad for their first fishing tournament.

Tips & Tricks for Winning The King

You’ve paid the entry, gotten yourself, your team and the boat all the way down to Madeira Beach and maybe had your first fruity cocktail. Now, how do you go about walking the stage at the KING?

There are as many tips, tactics and individual techniques as there are anglers. Sorting through them all is beyond the scope of a magazine article. However, location, location, location: Every angler knows “that spot” no matter where they fish. You know, the spot that regularly coughs up the fish you are on the water to catch.

Coming out to fish the KING, even if it is from only one town away, you probably don’t know the spot in the waters adjacent to Madeira Beach and surrounds. Fear not, Jon West, a true Old Salt if there ever was one, compiled a list of, not one but nine, landmarks dilly holes, conditional hot zones and parking lots that increase your odds of finding a smoker kingfish before your first bait even hits the water.

In his 2006 article “9 Places to Catch a Smoker King,” West discusses spots like The Peaks, Egmont Channel, beach hard bottoms, wrecks, artificial reefs and more. Couple West’s insights with the power of Google and you’ll have all the local knowledge you need to find some productive water.

Feed the dog the dog food it likes: Kings are voracious eaters and will go after all manner of bait. That said, as Dan Casey (2017 King of the Beach Winner) is fond of reminding us, Big Kings Like Big Baits. Yes, smoker Kings can be caught on just about any size bait and with a bewildering array of riggings but presenting them big blue runners, decent size Spanish mackerel or big ribbonfish will improve your chances of hooking up with a legitimate smoker king.

Another tip from Dan is to carry lots of different baits on tournament day. You will likely run into Kings that are eating. Be ready to deploy some of what those kings are already munching when you arrive at their current dinner table.

Now that you’re armed with some local knowledge plus a few key tips and tactics, all that is left is to get out to the next King of the Beach Kingfish Tournament and test your mettle.

Old Salt Fishing Foundation is a 49-year-old, not-for-profit, fishing organization headquartered in Madeira Beach. The Foundation serves anglers with a variety of youth and family programs, competitive fishing tournaments and angler advocacy efforts. The Foundation operates with an all-volunteer staff and board of directors. Old Salt has delivered fishing, tournament, conservation and education programs and opportunities for tens of thousands of anglers all while donating in excess of $1 million to deserving regional charities.